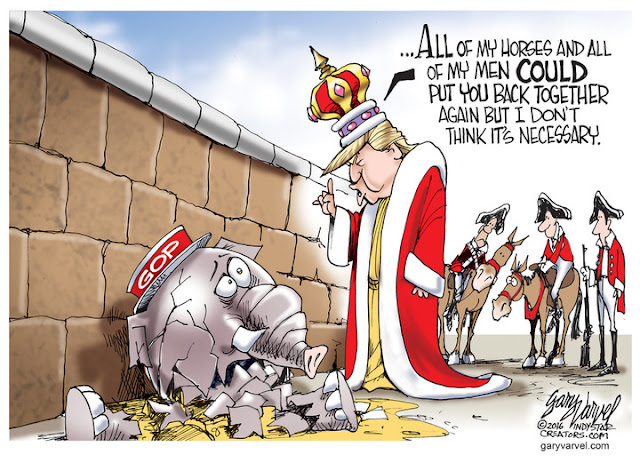 I don't do this often, but I'm posting Robert Reich's article in its entirety below. In a few words, Reich explains how the Republican Party can no longer make any claim to being deficit hawks, defenders of states' rights, or foreign policy tough guys. Simply put, they've become Trump's tool, and are either too spineless or absorbed with the pursuit of power to be a principled institution of American democracy.

America has never had a president as deeply unpopular at this stage of his presidency, or one who has sucked up more political oxygen. This isn’t good news for the Republican Party this November or in the future, because the GOP has sold its soul to Trump.
Three principles once gave the GOP its identity and mission: Shrink the deficit, defend states’ rights, and be tough on Russia.
Now, after a year with the raving man-child who now occupies the White House, the Republican Party has taken a giant U-turn. Budget deficits are dandy, state’s rights are obsolete, and Russian aggression is no big deal.
By embracing a man whose only principles are winning and getting even, the Republican Party no longer stands for anything other than Trump.
Start with fiscal responsibility.
When George W. Bush took office in 2001, the Congressional Budget Office projected a $5.6 trillion budget surplus over 10 years. Yet even this propitious outlook didn’t stop several Republicans from arguing against the Bush tax cut out of concern it would increase the nation’s debt.
A few years later, congressional Republicans were apoplectic about Obama’s spending plan, necessitated by the 2008 financial crisis. Almost every Republican in Congress opposed it. They argued it would dangerously increase in the federal debt.
“Yesterday the Senate cast one of the most expensive votes in history,” intoned Senator Mitch McConnell. “Americans are wondering how we’re going to pay for all this.” Paul Ryan warned the nation was “heading for a debt crisis.”
Now, with America’s debt at the highest level since shortly after World War II – 77 percent of GDP – Trump and the GOP have enacted a tax law that by their own estimates will increase the debt by at least $1.5 trillion over the decade.
What happened to fiscal responsibility? McConnell, Ryan, and the rest of the GOP have gone mum about it. Politics came first: They and Trump had to enact the big tax cut in order to reward their wealthy patrons.
States’ rights used to be the second pillar of Republican thought.
For decades, Republicans argued that the Constitution’s Tenth Amendment protected the states from federal intermeddling.
They used states’ rights to resist desegregation; to oppose federal legislation protecting workers, consumers, and the environment; and to battle federal attempts to guarantee marriage rights for gays and lesbians.
When, in 2013, the Supreme Court relied on states’ rights to strike down the heart of the Voting Rights Act, then-Senator Jeff Sessions broke out the champagne. “good news!“ said the GOP’s leading advocate of states’ rights. =
But after a year of Trump, Republicans have come around to thinking states have few if any rights.
As Attorney General, Sessions has green-lighted a federal crackdown on marijuana in states that have legalized it.
He and Trump are also blocking sanctuary cities from receiving federal grants. (A federal judge recently stayed Trump’s executive order on grounds that it violates the Tenth Amendment, but Trump and Sessions are appealing the decision.)
Trump is also seeking to gut California’s tough environmental rules. His Interior Department is opening more of California’s federal land and coastline to oil and gas drilling, and Trump’s EPA is moving to repeal new restrictions on a type of heavily-polluting truck California was relying on to meet its climate and air quality goals.
Meanwhile, the Republican House has approved the Concealed Carry Reciprocity Act, which would prevent states from enforcing their own laws barring concealed handguns against visitors from other states that permitted them.
For the new GOP, states’ rights be damned. Now it’s all about consolidating power in Washington, under Trump.
The third former pillar of Republicanism was a hard line on Russian aggression.
When Obama forged the New Start treaty with Moscow in 2010, Republicans in Congress charged that Vladimir Putin couldn’t be trusted to carry out any arms control agreement.
And they complained that Obama wasn’t doing enough to deter Putin in Eastern Ukraine.  “Every time [Obama] goes on national television and threatens Putin or anyone like Putin, everybody’s eyes roll, including mine,” said Republican Senator Lindsey Graham. “We have a weak and indecisive president that invites aggression.”
That was then. Now, despite explicit findings by American intelligence agencies that Russia interfered in the 2016 election – the most direct attack on American democracy ever attempted by a foreign power – Republicans in Congress want to give Russia a pass.
They don’t even want to take steps to prevent further Russian meddling. They’ve played down a January report by Democrats on the Senate Foreign Relations Committee warning that the Kremlin will likely move to influence upcoming U.S. elections, including those this year and in 2020.
The reason, of course, is the GOP doesn’t want to do anything that might hurt Trump or rile his followers.
The GOP under Trump isn’t the first political party to bend its principles to suit political expediency. But it may be the first to jettison its principles entirely, and over so short a time. 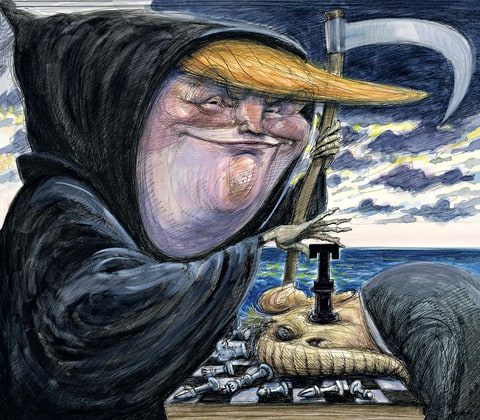 If Republicans no longer care about the federal debt, or state’s rights, or Russian aggression – what exactly do they care about? What are the core principles of today’s Republican Party?
Winning and getting even.
But as a year with Trump as president has shown, this is no formula for governing.
________________________________
- Mark
Posted by Mark A. Martinez at 6:52 AM