For those of you who haven't seen it, below I've attached the article Robert Price - editor and CEO of the Bakersfield Californian - wrote about Kevin McCarthy, our local congressman and aspiring Speaker of the House. 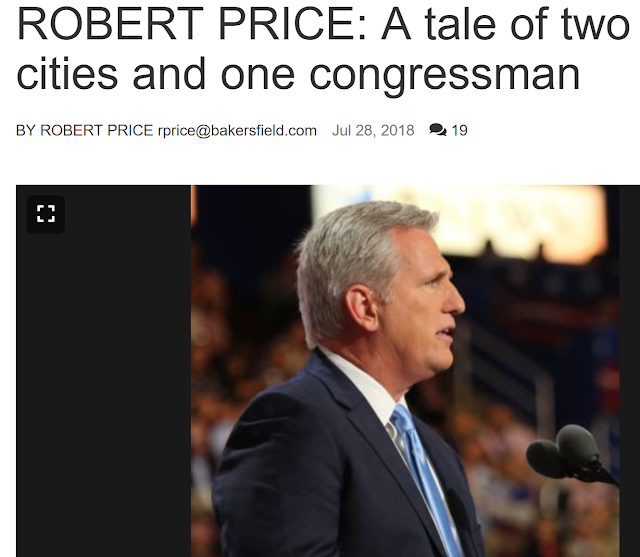 Congressman Kevin McCarthy leads a double life.
In Washington, he's golden: Heir apparent to retiring House Speaker Paul Ryan, frequent and familiar White House guest, donor-connected darling of vulnerable Republican incumbents.
In Bakersfield, not quite so much anymore: He's still a man constituents really, really want to believe, considering his warm reception at fundraisers and service club luncheons. But recent events have at least some of them wondering on which coast his allegiances truly lie.
In Washington, he collects big checks and hands them out too. McCarthy personally raised $12 million in campaign donations in the second quarter of 2018, running his take in this election cycle to a cool $40 million, and he has already distributed half of that total to GOP candidates. That doesn't include Thursday's haul at the Capitol Hill Club, where McCarthy secured commitments for $10 million from House Republicans — with the biggest check, $6 million, coming from McCarthy himself.
But back in his hometown district, growers are still sweating President Trump's tariffs. California is on the front lines of this growing U.S.-China trade war, and Kern County, the state's biggest agricultural producer, is especially vulnerable. Tree nuts, a huge local crop, have been specifically hard hit, a fact that must be particularly painful given McCarthy's personal connections with people in the Kern County almond and pistachio business.
Thank goodness for that $12 billion federal farm aid package, right? You know, the money that's supposed to ease the impact of China's retaliatory counter-tariffs. Except the people benefitting from the aid package are primarily the producers of soybeans, sorghum, corn, wheat, cotton, dairy and hogs — in other words Midwestern states and not (except for dairy) California.
How can that happen, you ask, given McCarthy's co-starring role in the Donald Trump show alongside House Intelligence Committee chairman Devin Nunes of Fresno? They're both Trump favorites who've gone to bat for the president time and time again. And they represent vital California farming districts.
Tough luck, Central Valley. Republican strategists know their districts will send McCarthy and Nunes back to Washington in November (and California will still be blue in 2020) no matter what they pull on constituents. But things aren't so certain in vulnerable pockets of the heartland. So, campaign strategy, not district economic need, carries the day.
McCarthy has his challenges in Washington, too. His path to the speakership was cleared considerably when Ryan and the majority whip, Rep. Steve Scalise of Louisiana, endorsed him; Scalise had considered a run himself. But it was muddied again Thursday when Rep. Jim Jordan of Ohio, co-founder of the conservative Freedom Caucus, announced that he would seek the speaker post.
Most House Republicans recognize that Jordan is a long shot. But Jordan could try to extract promises from McCarthy, should Republicans hold the House in November. And one of those promises is sure to involve an immigration game plan that rejects anything that smells even remotely like amnesty.
Already McCarthy has had to go back on a promise to hold a vote before the August recess on a conservative immigration bill that included a much-needed guest-worker program for farmers. That flip put McCarthy in an awkward spot; just last month he had assured several rank-and-file members there'd be a vote, and his assurances compelled at least two congressmen to withhold support for legislation that would have created a pathway to citizenship for Dreamers. They figured they'd have the opportunity to do so again in August. Now they probably won't.
“There are those of us (who) need to go back (home) and show that we’re doing all we can to do (on immigration reform)," one of those Republican congressmen, Dennis Ross of Florida, told Politico. "... And if it fails, it fails."
The American Farm Bureau Federation supports a guest worker program, and so does the Kern County Farm Bureau, which reprinted in its members' newsletter one of my recent columns criticizing McCarthy's conflicting allegiances.
Bakersfield has noticed, Kevin.
I'll concede McCarthy has one tough job. He's supposed to keep 236 Republicans in line and on the same page, a task that is quite impossible. He's also supposed to be looking out for the 707,000 people of the 23rd Congressional District, however, and when the interests of those two jobs diverge, he regularly chooses the former over the latter.
In Washington, McCarthy is the golden goose, the man you want by your side if you're an at-risk Republican member of Congress in need of financial assistance.
But back in Bakersfield, if you're an almond grower worried about who might buy your crop next year, or a grape grower wondering who might be picking yours, McCarthy looks, more and more, like a different sort of poultry.
Robert Price's column appears Wednesdays, Saturdays and Sundays. Reach him at rprice@bakersfield.com or @stubblebuzz. The opinions expressed are his own.
**************