I got another FB message from a Trump apologist. He's the the same guy who blamed Obama for not fixing Bush's mess fast enough, and then bought into candidate Trump's claim that unemployment under Obama was really between 8 and 32 percent. He's now bragging about Trump's economy. My response is below. Feel free to cut and paste for the Trump friends you have left.


"_______, remember when the economy was still in the tank in early 2010, and you said the laggard economic performance was Obama's fault? But now, you're claiming Trump's 'The Man' because he effectively inherited an economy already on an upward trajectory.

Why did Obama get blamed for Bush's mess, but Trump's suddenly some kind of economic God?

What kind of White Privilege, "Blame Bush's Mess on the Black Guy, but Let’s Toast Trump for Obama's Economic Recovery" economic model are you looking at?

Look, it took Obama more than 2 years to fix Bush's mess, it's going to take Trump a while before he screws it up. And screw it up he will ...

Remind me again, how much higher is our budget deficit going to be this year, and the year after that?"

For the record, here's what was happening in the U.S. economy when Trump took over. The employment numbers are from the Federal Reserve ...

The unemployment chart below is from CNN Money ... 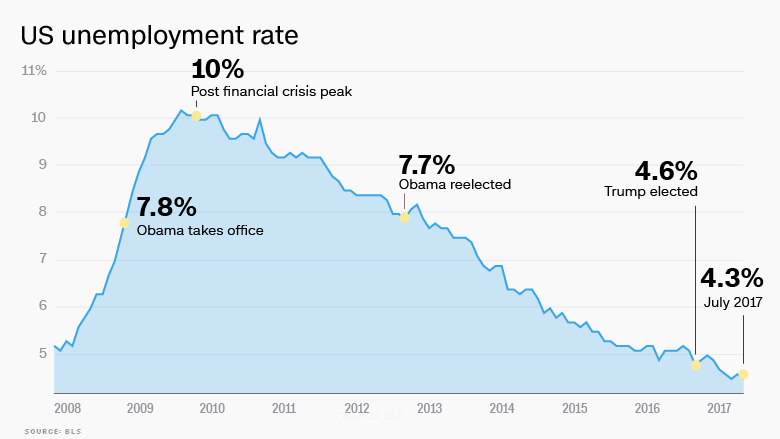