U.S. DECLINE UNDER TRUMP IS REAL ... FRANCE'S MACRON MAKING BID TO BECOME 'LEADER OF THE FREE WORLD' (and that's a good thing) 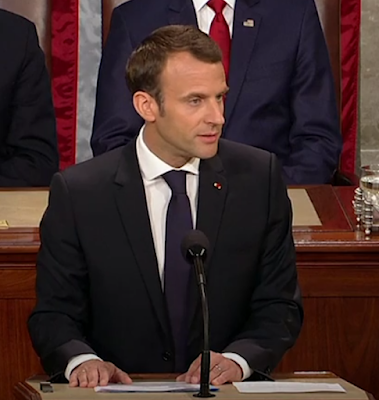 While speaking in front of the U.S. Congress President Emmanuel Macron, president of France, made it clear that he is not just another world leader. Telling the U.S. Congress there is "no Planet B," France's President Macron publicly rejected Donald Trump's position on climate change, and then challenged U.S. policy in the Middle East. He also made it abundantly clear - in what appears to be a growing global consensus - that the United States is not calling the shots under Donald Trump.

In the process, President Macron put in his claim - as Politico Magazine's Judah Grunstein put it - on the now vacant "leader of the free world" title. In what can only be called a slap in the face to Donald Trump, President Macron did it all in front of the U.S. president.

How serious is Macron's political maneuvering? Politico Magazine's Will Marshall argues that by challenging Trump directly, and by rejecting the vengeful populist-nationalism that put Trump in the White House, France's Macron has already become the leader of the free world.

Whether you believe France's President Macron is the new leader of the free world is not as important as realizing the following: Emmanuel Macron is helping to erase old left-right (worker-owner) battle lines. Shaped by 19th and 20th century industrial era ideologies, these battle lines fed nationalism, and drove our war-inspiring global politics in the 20th century.

At the same time, Macron's appealing to an emerging world populated by young, educated globalists who grew up in a world connected by technology, and managed by the first black American president. For those who don't understand what this means, know that France's socialist party took a beating in the last election. This tells us that, from an ideological perspective, new political fault lines are being drawn around the world.

Unfortunately, Donald Trump's base don't see any of this. They want America to return to a mythical past, where the colored folks knew their place and women made the sandwiches. Why embrace bullet trains and solar-wind power when Amtrak and oil can help America recapture its past?

The left-right politics and uber nationalism that dominated our 20th century may appeal to Donald Trump's base, but it confuses and confounds young and emerging elites around the world. Global leaders like France's Macron and Canada's Justin Trudeau seem to understand this, intimately.


Keep in mind Macron's election in France was due, in part, to the country's reaction to Brexit and the election of Donald Trump in the United States. The French, who bore the brunt of the global battles fought on the European continent in the 20th century, understand historical cues. Brexit and Trump represent historical messages that the world doesn't want to hear again.

President Macron laying claim to leader of the free world is also a good thing. Not only does politics abhor a vacuum, but the future should belong to those who see it.

I think Trump is just looking out for number 1. Trying to drag the country back to the mythical past is giving him WAY to much credit for having a vision, working towards it. I don't see enough consistent thought, planning, and execution. to believe he actually has a vision. there have been too many contradictions, too many lies, to much chaos. Trump is just floundering about trying to cover up his own dirt so that he can keep his money. He knows what to say to his base to keep them coming back for more.