A NATION FOUNDED BY GENIUSES BUT "RUN BY IDIOTS" SHUTS DOWN, AGAIN ... A TIMELINE OF CONGRESSIONAL INCOMPETENCE

This past week, with Congress heading for yet another government shutdown, U.S. Senator John Kennedy (R-La) said, "Our country was founded by geniuses, but it's run by idiots." Acting as if they were determined to prove Sen. Kennedy right, last night our Republican controlled Congress - led by a Republican president who touted his negotiating prowess in Art of the Deal - failed to collect enough votes to keep our government running. 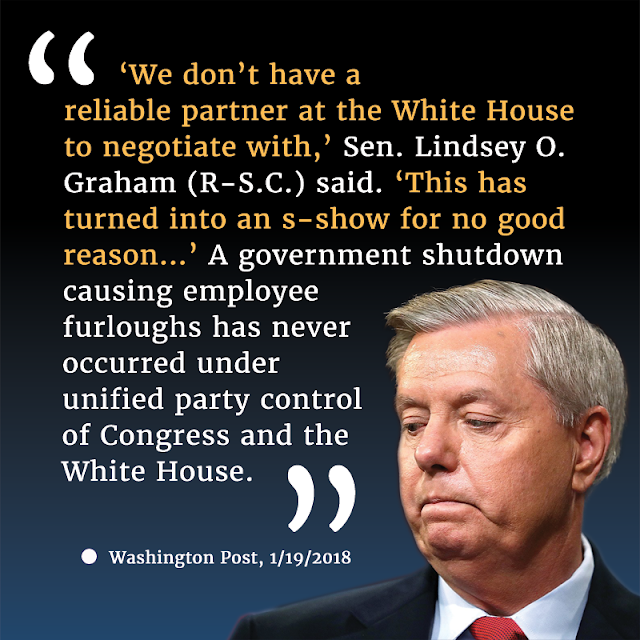 So, here we are; Donald Trump is the first U.S. president to have a government shutdown with his party in control of both the House and the Senate. Worse, it's coming just one year after he took the oath of office.

Because the talk shows and right wing media are going to do their level best to spin this as an immigration-inspired Democrat Party problem, it's necessary to look at the big picture over time. Let's review.

* PROTECT OUR SEATS: In 2013 Republicans, led by then Speaker of the House, John Boehner (R-Oh), decided not to bring a comprehensive immigration bill (S. 744) to the House floor, even though it had bi-partisan support. Why? because Speaker Boehner didn't want his party to be on record voting for an immigration bill. That would leave Republicans open to being "primaried" by Tea Party extremists, who oppose virtually any kind of immigration bill.

* DACA, THE STOPGAP MEASURE: In response to the GOP's failure to bring an immigration bill to his desk, President Obama created a stopgap measure for undocumented migrant children, DACA (Deferred Action for Childhood Arrivals). It allows law abiding migrant kids to stay in the U.S. under a series of guidelines that keeps them working, in school, in the military, or a combination thereof. Though DACA was always designed to be a temporary fix, this becomes the nation's de facto immigration program

* DACA CANCELLED: In an effort to appease his base, in September of 2017 Donald Trump said he would end DACA (Deferred Action for Childhood Arrivals) by March 2018 if Congress didn't come up with a plan by then. Trump says many things (and he's still saying a lot of things), but he effectively told Congress to fix DACA, or to send him a comprehensive immigration program. With a GOP-led Congress, Trump says he will sign what they send him.

* DACA, WITH A WALL: Responding to Senator Dianne Feinstein's (D-CA) query on Jan. 9, Donald Trump said he would accept a "clean" (no riders, or other deals) DACA deal, only to be corrected by Rep. Kevin McCarthy (of all people), who reminded Trump that border security had to be part of a DACA deal (in my exchange with Kevin McCarthy, I explain to him why this is not the case here). Trump reversed (clarified?) his comments the next day, when he made it clear that there had to be provisions for his border wall if he was going to deal with immigration.

* BI-PARTISAN BILL REJECTED / THE "SHITHOLE" COMMENTS: After saying that he would sign anything that was put in front of him that was supported by Republicans, Donald Trump rejected a budget proposal that was crafted and put in front of him by Senators Chuck Schumer (D-NY) and Lindsay Graham (R-SC). When senators arrived to present Trump with the plan, he rejected it out of hand. This is when Trump is reported to have asked, why the deal had to let people in from "shithole countries" like Haiti, El Salvador and Africa.

* BI-PARTISAN BILL REJECTED, II: With word getting out that Senate Minority Leader, Chuck Schumer (D-NY) was on his way to speak with Donald Trump in the White House, alone, Republicans sprang into action. It didn't matter that Sen. Schumer was willing to put funding for a border wall back on the table. What emerged yesterday was a comical exchange of "he said, she said" nonsense, which forced the government shutdown we're experiencing today.

The frustrating thing is that it didn't matter to Donald Trump that the Democrats were putting more money on the table for the military. It didn't matter that the Democrats were even offering money Trump's border wall. At the end of the day, Donald Trump was convinced by Republican hard liners not to do anything on the budget if it included a bipartisan plan dealing with DACA and immigration.

So, in a few words, the evil genius of the Republican Party - which begins with them trying to save their congressional seats, and refusing to bring a bipartisan immigration bill to the floor in 2013 - has brought us to the point where the U.S. government is shutting down. Why? Because hardliners in the GOP - which includes Bakersfield's own Kevin McCarthy - don't want to fix an immigration problem that they caused, and should have fixed long ago.

Republican Senator Lindsay Graham's comment that Donald Trump is not a "reliable" partner might be too generous. Donald Trump is not only unreliable, he's a liability. He has no idea what he's doing, and he's surrounded himself with sycophants and toadies like Kevin McCarthy, who are just happy to be in the room, serving candies to the president.

Republican Senator Kennedy was probably closer to the point than Senator Graham on this one. At this moment in time, the U.S. Congress is run by idiots. They are shadow boxing with themselves, and just turned out the lights.

The Republican Party and Donald Trump own this shutdown.