DONALD TRUMP AFTER ONE YEAR: THE GLOBAL COMMUNITY ISN'T IMPRESSED WITH OUR MAN-CHILD 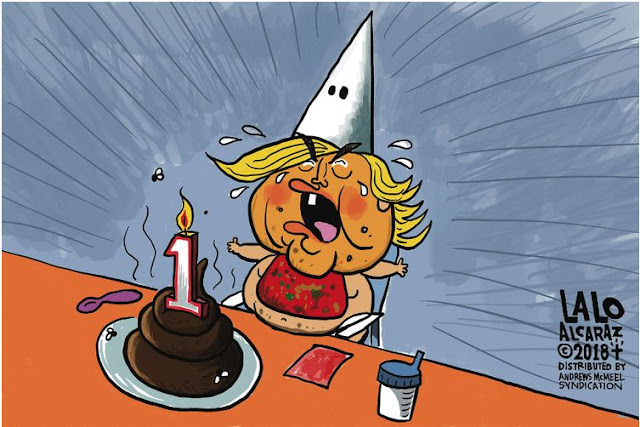 Donald Trump's administration has one year under its belt now. We can now start making some real assessments about what was promised, and what's actually happening. One thing stands out: If by "Make America Great Again" Donald Trump meant alienating allies, fomenting global distrust, and driving nations around the world to mock veiled praise from the United States, then Donald Trump has been a success. Bigly.

From crashing poll numbers, to shifting their foreign policy focus away from America, to being hung out to dry by Trump's avatar, Mother Russia, the United States has seen its global prestige and international influence slip, on many levels. The world, unlike Donald Trump's domestic supporters, understand that whining and playing nuclear patty cake with North Korea's Kim Jong Un are not a "winning" combination.

Below are just a few articles that chronicle American decline in the eyes of the world under Donald Trump.

In the Trump Era, everyone hates us (Mother Jones).

'Thanks, but no thanks': Norwegians reject Trump's immigration offer (Reuters).

U.S. tried to get cute on Iran but was promptly rebuffed by Russia, which asked about Black Lives Matter (The Root).

UPDATE II (1-25-18): Trump is the worst salesman American has ever had: The United States is more unpopular than ever before, and that's no accident (Foreign Policy).