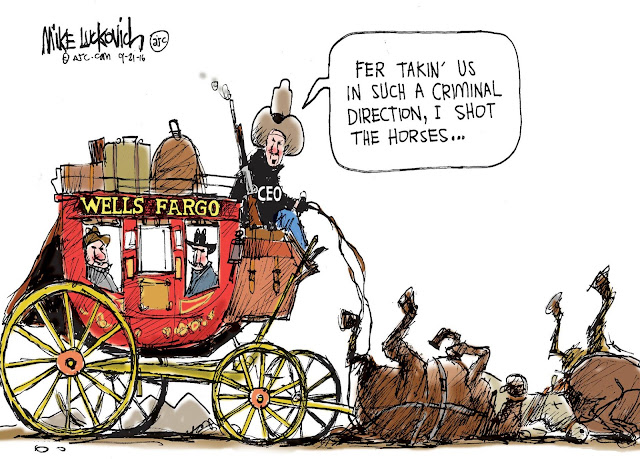 The Mike Luckovich cartoon above reflects how banking giant Wells Fargo fired 5,300 low level employees who opened bogus accounts on behalf of clients, all because they were pressured and then threatened with dismissal if they did not meet account quotas. Because new accounts generated new fees, top level executives were able to pay themselves big bonuses, while demanding higher salaries, as "new accounts" began piling up across the company.

The problem, as Senator Elizabeth Warren (D-Mass) points out, is that many (most?) clients had no idea new accounts were being opened in their name, or how much in fees they were actually paying. They were being scammed, under the guise of "deepening customer relations" at Wells Fargo.

It apparently doesn't matter to Wells Fargo's CEO, John G. Stumpf, that thousands of low level employees, who were just following orders, got fired for running the scam. As long as senior executives got their bonuses from "producing" so many new accounts, there seems to be no sense of guilt or remorse at Wells Fargo, as Senator Warren helps us see in the epic smack down she issues to CEO Stumpf below.


There's more, but you get the point. Many of America's financial executives learned nothing from 2008 and, quite frankly, operate as if the "logic of the market" gives them the right to operate like con men and crooks.

Addendum: For the record, opening new accounts (cross selling) simply because it generates new fees and revenue - and not because the clients want or need the accounts - is a classic example of wealth extraction.

Analysts Predict: Your Financial Savings Will Be Gone In 12 Months

BREAKING NEWS: Analyst predicts the fall of the US Dollar within 12 months

The US is no longer the power house and it once was.

We already have more problems than we can handle across the border.

Not to mention the unemployment rates rising.

Now all these things are NOTHING to what’s going to come next.

You see the US Dollar itself is going to collapse.

The downtrend has been clear since 1973.

Now we’re on the verge of total financial meltdown.

And the worst thing is…

We cannot stop or avoid it this time.

Make sure you watch that video before it’s taken down by the government.

This is serious stuff and you need to share it with your friends and family if you truly care about their safety.