WALL STREET'S GET OUT OF JAIL FREE CARD ... "INTENT"

If you ever wanted to know why no one from the financial sector and Wall Street is behind bars look no further than this 60 Minutes piece on mortgage fraud and Countrywide. Simply put, committing fraud isn't enough to get you prosecuted. You have to show that fraud was also intended (can you imagine a criminal defendant saying, "I didn't mean to kill him, he just happened to be in the way of my bullets"?).


Also, in the FYI category, none of this was confined simply to Countrywide either. It was prevalent and encouraged throughout the industry (and by Wall Street), and is indicative of corporate entitlements and protections that you and I don't get. 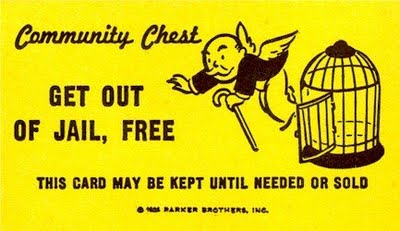 I've said it before, and I'll say it again, we can fix a lot of this if we understood Bill Black's "control fraud" better, and used RICO statutes to go after our financial institutions as criminal enterprises ...

You have to show that fraud was also intended (can you imagine a criminal defendant saying, "I didn't mean to kill him, he just happened to be in the way of my bullets"?).


No one has ever summed up the corporate (or, perhaps I should say the "Market") mentality as such. That made my day and I will be quoting you on this!