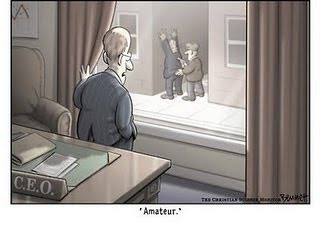 During the height of the market crisis in 2008 the Federal Reserve demanded unusual security procedures before sharing or supplying critical A.I.G. bailout related documents. The Securities and Exchange Commission (SEC) said that if it agreed to go along with the request it would store the information it received where national security related files are kept.

According to this New York Times article, A.I.G. effectively gave up it's right to sue Wall Street firms once it took bailout money. Wall Street titans like Goldman Sachs, and their financial partners in crime, effectively got a blanket waiver from lawsuits from A.I.G. Why did this happen? Because Wall Street's biggest firms were really trying to cover their butts, and we're using their buddies in Washington to help them do so. 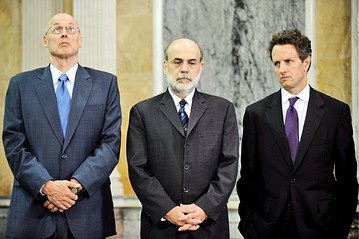 One way for Wall Street's biggest firms to cover their butts and avoid lawsuits (and even jail time) was to get A.I.G. - the insurer of their toxic crap - to give up their right to sue on behalf of shareholders. So Wall Street's friends at the Federal Reserve and the Treasury Department made A.I.G. an offer they couldn't refuse: Waive your right to sue and take our money with full payouts, or go under.

As I've pointed out before (many times), I think it's time we start thinking about invoking the Racketeer Influenced and Corrupt Organizations Act of 1970 (RICO) to get some answers. Think about it. The only reason you would want to have your market information classified along national security lines AFTER the fact is because you've got something incriminating to hide (proprietary information, after all, doesn't need national security status). Any good prosecutor will tell you that a request to secure security status for documents suggests two things. Somebody has something to hide, and panic. Panic is good, if you're a good prosecutor.

To get a RICO case going on a Wall Street firm (which has been done before) the SEC would have to show a "pattern of racketeering activity" that was committed by an "ongoing criminal organization." What's more criminal than duping investors with toxic assets and then stealing taxpayer money?