DEUSTCHE BANK ... THE TRUE FACE OF BIG BANKS IN AMERICA? 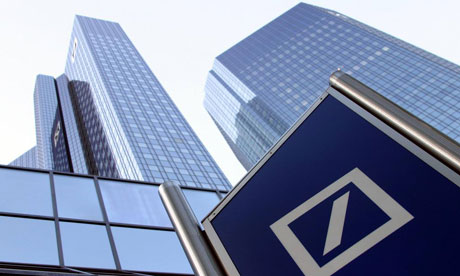 Most of you have heard of Deustche Bank. Some of you might even bank with them. A regional Deustche branch in Atlanta requested the eviction of Vita Lee, a 103-year-old Atlanta woman, and her 83-year-old daughter. They have lived in the home for 53 years. The good news is that when the movers and county sheriff arrived they took one look at the bed ridden 103-year-old and had a change of heart.


No doubt - in spite of the movers and sheriff being the good guys here - Deustche Bank will try to spin the event so that they look like they're merciful bankers. Then they'll probably try the eviction again, when no one's looking. But, in reality, whatever reprieve is granted to Vita Lee, the merciful banking face we're looking at resembles the one in this scene ...

For those of you who aren't familiar with Deutsche Bank know this: Deutsche Bank was a big trader bettor in the toxic market instruments that Wall Street gambled on during the U.S. mortgage bubble.

Indeed, a Senate report about Wall Street and the financial crisis found that Deutsche Bank even continued to churn out toxic crap even as the market was collapsing, with one top trader betting that home mortgages (which were inside the larger toxic instruments, or CDOs) would fail. Put more simply, Deutsche Bank set themselves up to make money when they foreclosed on certain mortgages. This helps explain why selling faulty mortgages and then kicking a 103-year-old out of her house makes good business sense for Deutsche Bank. They make money off the process.

And, yes, apart from lying to customers in the U.S. and Germany about the investments, Deustche Bank received over $12 billion in bailout funds, and was poised to take a hit of hundreds of billions if the U.S. government didn't bailout A.I.G. (kind of like the House in Vegas covering your losses into the hundreds of thousands, but allowing you to keep your winning bets).

Oh, and for good measure, the former chief economist at the International Monetary Fund called the CEO of Deustche Banks, Josef Ackermann, “one of the most dangerous bankers in the world” because of his reckless business practices.