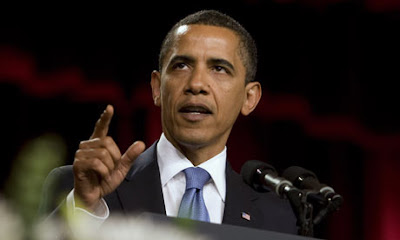 President Obama's speech on the budget today is the kind of speech I could see myself writing. It provides an intellectual framework for our budget future that's realistic and affirming.


Here's the link for the written speech, with some of the money quotes copied below.

On the role of government ...

* We believe, in the words of our first Republican President, Abraham Lincoln, that through government, we should do together what we cannot do as well for ourselves.

* Part of this American belief that we’re all connected also expresses itself in a conviction that each one of us deserves some basic measure of security and dignity.  We recognize that no matter how responsibly we live our lives, hard times or bad luck, a crippling illness or a layoff may strike any one of us.  “There but for the grace of God go I,” we say to ourselves.  And so we contribute to programs like Medicare and Social Security, which guarantee us health care and a measure of basic income after a lifetime of hard work; unemployment insurance, which protects us against unexpected job loss; and Medicaid, which provides care for millions of seniors in nursing homes, poor children, those with disabilities.  We’re a better country because of these commitments.  I’ll go further.  We would not be a great country without those commitments.


On the Republican budget proposal ...

* [The Republican plan] says even though Americans can’t afford to invest in education at current levels, or clean energy, even though we can’t afford to maintain our commitment on Medicare and Medicaid, we can somehow afford more than $1 trillion in new tax breaks for the wealthy.

* [The Republicans] want to give people like me a $200,000 tax cut that’s paid for by asking 33 seniors each to pay $6,000 more in health costs.  That’s not right.  And it’s not going to happen as long as I’m President.
* I will not allow Medicare to become a voucher program that leaves seniors at the mercy of the insurance industry, with a shrinking benefit to pay for rising costs.  I will not tell families with children who have disabilities that they have to fend for themselves.

* ... we cannot afford $1 trillion worth of tax cuts for every millionaire and billionaire in our society.  We can’t afford it.  And I refuse to renew them again.

* ... the tax code is also loaded up with spending on things like itemized deductions.  And while I agree with the goals of many of these deductions, from home ownership to charitable giving, we can’t ignore the fact that they provide millionaires an average tax break of $75,000 but do nothing for the typical middle-class family that doesn’t itemize.  So my budget calls for limiting itemized deductions for the wealthiest 2 percent of Americans -- a reform that would reduce the deficit by $320 billion over 10 years.


Whether President Obama is able to get what he outlines here is another matter. Still, he did lay down some markers that will be hard for him to ignore on the campaign trail. This is refreshing.

P.S. I also like how President Obama finally found the nerve to lay the blame for our budget mess today where it really lies - with the Bush administration, and the Reagan-inspired tax cuts for the rich policies.
Posted by Mark A. Martinez at 10:09 PM

You know, I read his book, The Audacity of Hope, when he decided to run for president. I agreed with so many things in the book that I decide to choose him over Hilary and Edwards. However, I have just about lost hope in the guy. It's just politics as usual. He really screwed up the first two years. Now he is using the same tone when he was running for president. The only hope I have left is this is all part of a bigger plan: "I'll play it safe the first term so I can get reelected. Then I'll really do some changes. It won't matter what they think because I'll be out of here in 4 yrs." Although that would be stupid too because we would support him because he got us out of the mess. Sadly, in my eyes, he is looking more and more of a guy with more bark than bite. Great great speaker, but too soft. Nonetheless, I would still vote for him again in a heart beat.