HOW TEABAGGERS WEAKEN OUR NATION

One of the things that draws me to challenge the sincerity of our Teabagging Republicans, and their FOX News patrons, is how their Anti-Tax Jihad not only exposes our country to geo-economic blackmail but how their Teabagging Temper Tantrum fails the "Adam Smith" test.

Think about this. Our nation depends on the good will of others to fund what we do. Currently, the top six purchasers of our debt - China, Japan, Russia, "Oil Exporters", Brazil, Caribbean Banking Centers (i.e. off-shore tax havens) - hold at least $2 trillion of our securities.

Of these only Japan, and perhaps Brazil, can be considered friendly to the U.S. The others could turn on us at any time ... yes, that includes the money that comes from the tax haven Caribbean nations, which are filled with tax cheats, money launderers, and wealthy traitors seeking to escape paying their fair share here. These groups are the real Pirates of the Caribbean. 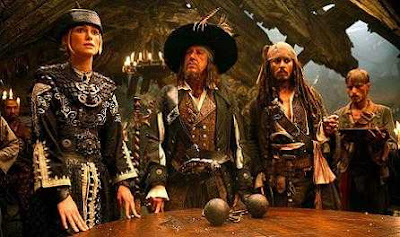 The interesting point here is that rather than having our nation's richest and most leisure class (the same group who gained the most during the Reagan/Bush Years) pay what they paid in taxes under Ronald Reagan, Republicans and their Teabagging Buddies at FOX News want our nation to continue borrowing from people and nations who aren't our friends. Yes, they want to continue exposing our nation to the threat of economic blackmail. So much for "Country First" ...

As well, the Republicans are completely clueless to the fact that their anti-tax Jihad wouldn't sit right with the founding father of capitalism, Adam Smith.

While writing The Wealth of Nations (1776) the intellectual Godather of Capitalism recommended, and even encouraged, taxing the wealthy at a higher rate than the middle class. He argued, for example, that luxury carriages should pay higher tolls than regular or commercial travelers because he believed that "the indolence and vanity of the rich" should be made to contribute to larger societal goals.

And what do our economic elites do when confronted with the prospect of helping to put our nation's economy on firm financial footing? They send their money off-shore. According to recently released reports the United States loses up to $100 billion a year in tax revenue to offshore tax havens (the cost to individual states can be seen here).

Who do you think has to make up the difference? Yes, that's right, you and me. Worse, we're forced to go to the Chinese, tax cheats, and OPEC & other oil nations to fund our debts so that we can fight wars Republicans don't want to pay for, and refuse to fight.

This, my friends, explains what the Teabaggers at FOX & Republicanlandia want to promote with their political temper tantrum.