One of the things I've been meaning to post on the past couple of days was the Obama administration's decision not to prosecute those in the CIA who used torture techniques during the Bush administration. 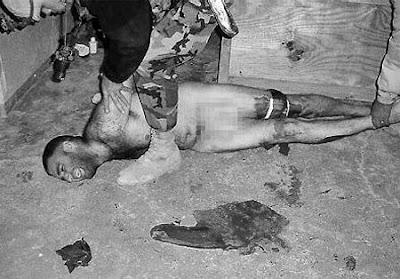 Asserting that the country needed to move beyond "a dark and painful chapter in our history" President Obama made it clear that that those who used enhanced interrogation tactics during the Bush administration are officially off the hook, and will not have to pay legal fees (or judgments) should they be pursued via other channels.

This is an interesting position because others who were wrapped up, or who got caught up in, the Bush administration's dark side of governance have not fared so well. This story about Thomas Tamm, who received the Ridenhour Prize for Truth-Telling, is illustrative. In a few words Tamm was one of the first to "drop a dime on the Cheney-Bush administration's illegal interception of phone calls and e-mails."

Tamm was a lawyer at the Department of Justice when he anonymously called The New York Times. He told Eric Lichtblau that the NSA was illegally spying on U.S. citizens. Lichtblau and Times reporter James Risen eventually won a Pulitzer for telling the story that Tamm brought to their attention. Tamm, however, hasn't fared so well.

The FBI has pursued him relentlessly for the past two and a half years. Agents have raided his house, hauled away personal possessions and grilled his wife, a teenage daughter and a grown son. More recently, they've been questioning Tamm's friends and associates about nearly every aspect of his life. Tamm has resisted pressure to plead to a felony for divulging classified information. But he is living under a pall, never sure if or when federal agents might arrest him.

Exhausted by the uncertainty clouding his life, Tamm now is telling his story publicly for the first time. "I thought this [secret program] was something the other branches of the government—and the public—ought to know about. So they could decide: do they want this massive spying program to be taking place?" ... If somebody were to say, who am I to do that? I would say, 'I had taken an oath to uphold the Constitution.' It's stunning that somebody higher up the chain of command didn't speak up."

And just who is Mr. Hamm? Meteor Blades at Dailykos tells that this was a "guy whose uncle and father were FBI agents, who led the Young Republicans when he was at Brown University and who had a stellar career at the DoJ until he decided to expose the criminal behavior of the government he served ..."

And for his patriotism Mr. Tamm has been treated like a criminal. If President Obama can forgive CIA torturers who believed they were acting to serve this nation I think we can forgive Mr. Tamm. As Joe Conason put it:

If the telecommunication companies that helped the NSA to violate the law could be immunized with Obama's vote last year, if the Obama administration is reluctant to prosecute former Bush officials for their alleged crimes, and if the president and the attorney general recognize that illegal wiretapping is an intolerable offense against the Constitution, then it is long past time to lift the burden of investigation from Thomas Tamm. Let the government acknowledge what by now is obvious. No fair-minded jury would convict him, and none ever should.

I hope he gets his life back.