The quality of Citigroup's $1.6 billion first quarter earnings was so lousy that even the mainstream media took notice. And the bank's stock traded down 9%.

To give the highlights:

$2.5 billion of revenues came from lower market value of its debt thanks to a fall in credit quality. That was a common pattern of last year, when quite a few investment banks, Lehman in particular, marked down their debt, showing a corresponding increase in income.

The bank posted a number of one-off gains:$704 million from the sale of a remaining stake in a Brazilian credit card processor, and $360 million in reversals of reserves (part for a litigation, the rest relating to an audit).

Do the math. $1.6 billion - ($2.5 billion + 1.1 billion) is not a positive number. This is especially not good since it looks like the bank stress tests are proving to be garbage.

P.S. Potemkin Villages were purportedly fake settlements erected at the direction of Russian minister Grigori Aleksandrovich Potemkin to fool Empress Catherine II during her visit to Crimea in 1787. 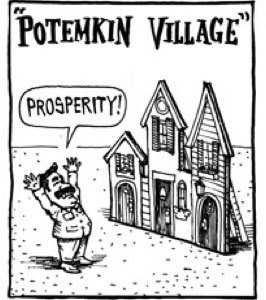 According to this story, Potemkin, who led the Crimean military campaign, had hollow facades of villages constructed along the banks of the Dnieper River in order to impress the monarch and her travel party with the value of her new conquests, thus enhancing his standing in the empress's eyes.
Posted by Mark A. Martinez at 10:28 AM