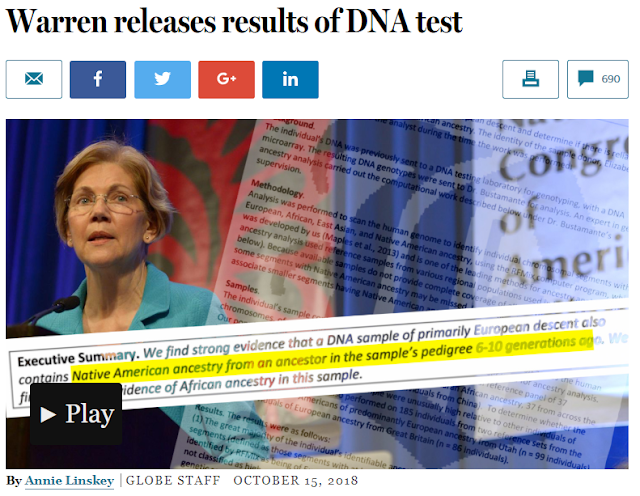 The DNA results show that Senator Warren has Native American blood at a level of 1/32, which makes her a lineal Native American descendant. Donald Trump, who got serious political mileage with his base after mocking Sen. Warren Warren's claim (see below), has backed away from his promise to pay up, even denying that he made the promise.

FLASHBACK: President Trump on Elizabeth Warren, 7/5/2018: "I will give you a million dollars to your favorite charity, paid for by Trump, if you take the test and it shows you’re an Indian." https://t.co/WNdyvfgaYd pic.twitter.com/ToAd1qaQJl
— The Hill (@thehill) October 15, 2018

All of this is made even more topical because of revelations that House Majority Leader Kevin McCarthy's brother-in-law applied for and was awarded contracts designed for people of Native American ancestry. Specifically, McCarthy's brother-in-law, William Wages, owns Vortex Construction in Bakersfield, and claims that he is 1/8 Native American (Cherokee). This has made him "eligible" to secure contracts set aside specifically for minority groups, and garnered him millions of dollars in federal contracts. The Los Angeles Times writes:

Wages says he is one-eighth Cherokee. An examination of government and tribal records by The Times and a leading Cherokee genealogist casts doubt on that claim, however. He is a member of a group called the Northern Cherokee Nation, which has no federal or state recognition as a legitimate tribe. It is considered a fraud by leaders of tribes that have federal recognition.


For his part, Rep. McCarthy has benefited and gotten a good deal of political mileage on his own by refusing to meet with Latino groups in his district, and for promising to carry legislation to build Donald Trump's divisive and race-baiting border wall. The wall, as many of you are aware, is designed specifically to keep out Mexicans and native-indigenous groups fleeing violence in Central America.

In all cases, here's something to keep in mind when discussing blood lines and ancestry. There's actually a system for monitoring and establishing "race" and indigenous categories. So, for example, Kevin's brother-in-law might be able to claim "lineal" heritage (though Cherokee genealogists cast doubt on the assertion) but it appears he might not be able to apply for and qualify as a member of any recognized indigenous group. Some tribal groups require 50 percent, while others require 25 percent, and others 12.5 percent (1/8) and 6.25 percent (1/16).

Again, the tribal group Wages claims is not recognized by legitimate indigenous groups.

On another level, one could make the case for "lineal descent" (less than 1/16?) but that doesn't necessarily qualify the claimant for programs or the contracts managed and ran by the federal government. At the end of the day, a Certificate of Degree of Indian Blood (CDIB) can be secured from the Bureau of Indian Affairs, which is run by the U.S. Department of Interior. The CDIB certificate "is the basis most tribes use to enroll tribe members." 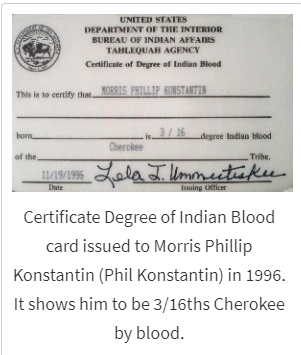 Coming from a party and president that seems hell bent on making it difficult for certain ethnic, indigenous and religious groups to enjoy the American experience, it appears that Donald Trump and Kevin McCarthy certainly have no problem using - and letting others use - ethnic distinctions for political and economic gain when it suits their interests.

This isn't just hypocrisy. These people are simply vile human beings who make a mockery of what America is, and what America represents to the rest of the world.