LET'S RESIZE THAT WITH A VORONOI DIAGRAM ... A GLOBAL, NATIONAL, AND REGIONAL LOOK AT ECONOMIC CONTRIBUTION

The Voronoi diagram below shows us the relative size of each country's economy in terms of nominal GDP. The U.S. continues to lead the global pack, and produces about 23.32% of what the entire world produces. 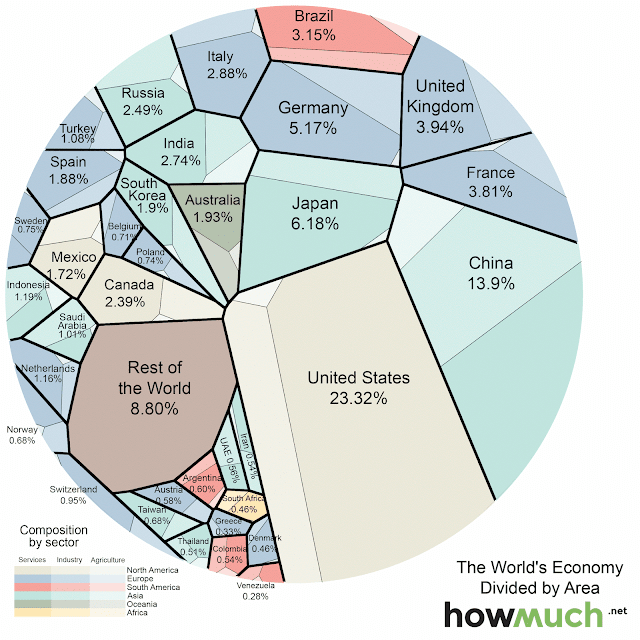 Using another Voronoi diagram, below we see the relative size of each state in the U.S. by economic contribution.

As a side note, we can see from the diagram above that 12 poor(er) conservative states contribute 21.5% of what the U.S. economy produces. Here's a fun fact. They get to send 24 conservative U.S. senators to Washington. On the other hand, California and New York combined contribute 21.4% of what the U.S. economy produces. Now for a real fun fact. California and New York only get to send 4 U.S. senators to Washington. This is one of the reasons why we see a massive redistribution of wealth in the U.S., where America's poorest states end up with more federal tax dollars than richer states - like California and New York.

Finally, below we see how the U.S. would look if we resized each region by the amount a small group of counties contribute to the national economy. The size of the U.S. economy is about $17.4 trillion.