IF WORLD WAR II WERE A BAR FIGHT 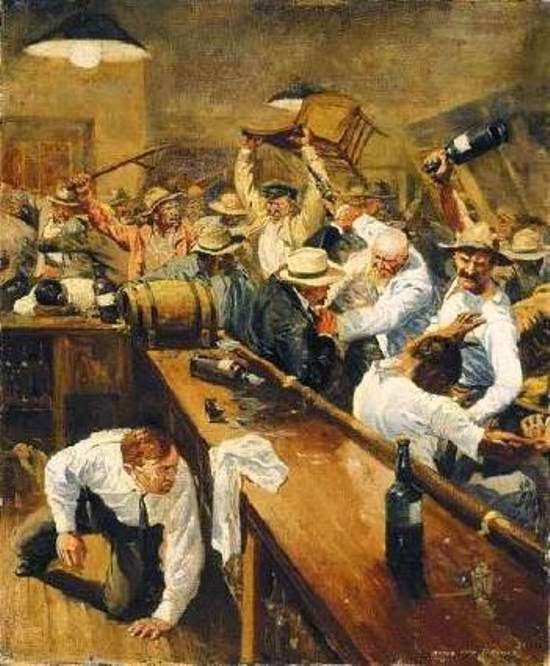 • After the last bar fight, America decides that he needs to be the bartender and the bouncer and moves behind the bar.

• Germany comes to and sees everyone drinking with his money and sees Austria sitting in the corner by himself.

• Germany, angry that Britain, France, and America took his wallet grabs Austria and makes him stand next to him.

• Germany then does the same to Czechoslovakia.

• On the other side of the room, Japan punches China. After a while, America tells them to knock it off.

• Germany signs a bar napkin telling Britain that he is done moving people over to his side of the room.

• Russia says he will help and ends up punching Poland from the other side.

• France and Britain begin swinging at Germany. Germany pushes Britain through the door and knocks him into the pool. France is also shoved through the door, but comes back in wearing a new beret and decides to hang out with Germany.

• Italy gets into a fight over the toys in the sandbox out back, gets a bloody nose and cries to Germany for help.

• Germany and Britain get into a tug of war over Italy’s sandbox.

• Britain and Germany begin throwing rocks at each others’ houses.

• Because Russia helped him with beating up Poland, Germany sucker punches Russia.

• While everybody is looking at Germany and Britain, Japan puts China into a headlock and begins punching his head.

• America tells Japan to knock it off and tells him he’s had too much to drink and he’s cut off.

• Japan jumps over the bar and punches America. And Britain. And France. And the Netherlands.

• Germany shakes his fist at America and makes a rude noise.

• America jumps into Germany’s sandbox and falls flat on his ass. Italy laughs at him.

• Because America is mad at Germany, America punches Italy.

• America, Britain and Australia gang up and start shoving Japan back into a corner on the other side of the room.

• Germany taps America on the shoulder and says, “What’s that over there in the snow?” Then he kicks America in the behind when he’s not looking.

• Everyone piles on Germany until he passes out.

• America hits Japan in the face with a baseball bat like Capone did in “The Untouchables”. Twice.

• As Japan is on his way to the floor, Russia shakes his fist at Japan, pretending that he’s joined the fight and hoping that he’ll be able to go through Japan’s wallet after the fight’s over.

• After Japan and Germany wake up, America, France, Britain, and Russia move into Germany’s House. America moves into Japan’s house, too.

• America buys drinks for Germany and Japan until everyone is happy again.


Then we have World War II in comic art form here.

If World War I were a bar fight here.

China Causes The USD To Fall?

I don’t know you have heard this yet…

But the USD Dollar is on the verge of collapse.

USD national debt is at an all time high and now financial experts are saying that China is starting to sell their debt holdings to the secondary market.

This means it won’t be too long until the USD crumbles in value!

I don’t want to be the bringer of bad news, but this is seriously not good for the US since we already have domestic problems of our own, such as immigration and unemployment.

Our economy can not withstand another hit.

Make sure you watch it before it’s taken offline.