It's good to see the national press picking up on the obvious ... 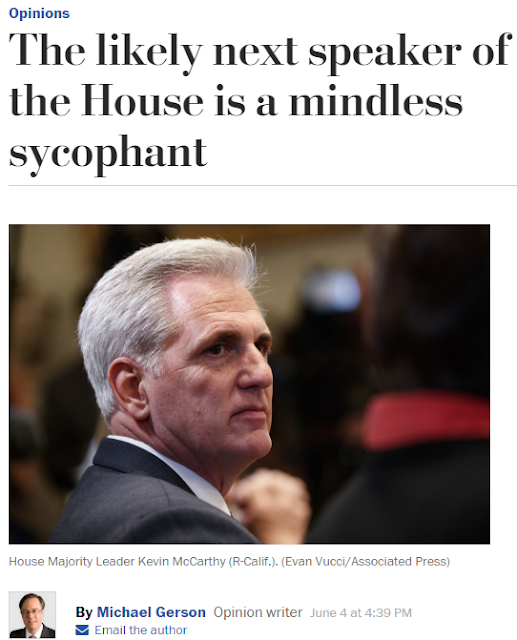 On the evidence of House Majority Leader Kevin McCarthy’s CNN interview over the weekend, the likely next speaker of the House is a mindless sycophant and a threat to the constitutional order.
Confronted with a simple ethical question — would he condemn demonstrable White House lies in covering up President Trump’s role in drafting his son’s account of the now-infamous 2016 Trump Tower meeting with Russians — McCarthy, a California Republican, was initially dumbstruck, then shifted into a prerecorded attack on special counsel Robert S. Mueller III. It would have been easy enough to say: “The president and his team are hurting themselves with unnecessary falsehoods. Their overall case, however, is strong.” But such is the atmosphere of intimidation in the Republican Party that affirming the Ninth Commandment is seen as an act of disloyalty. When the king is a liar, truth becomes treason.
For all his faults, Speaker Paul D. Ryan (R-Wis.) was occasionally capable of showing some ethical outrage. (After Trump attacked U.S. District Judge Gonzalo Curiel as biased because of his ethnicity, Ryan called it “the textbook definition of a racist comment.”) McCarthy seems to be more of a memory-foam Republican — taking the exact shape of presidential pressure. Ryan was clearly uncomfortable when ignoring his principles. McCarthy seems to view surrender to the president as a matter of principle — as part of the tribal code of the partisan. His is the loyalty of the lap dog, the devotion of the dupe ...
********

You can read the entire Washington Post article by clicking here.