AMERICANS BACK OBAMA'S PLAN TO TAX THE RICH

According to a new AP-Gfk poll 68 percent of Americans believe the wealthy pay too little in federal taxes. With America's wealthiest 1% accumulating the vast majority of the economic gains made over the past 40 years, the AP-Gfk poll makes it clear most Americans "support President Obama's proposal to raise investment taxes" on those making the most money in America.

In effect, Americans are saying: After more than $4 trillion in bailouts - which were orchestrated by the federal government after the Wall Street induced market collapse of 2008 - it's time for America's wealthiest class to quit basking in their state supported riches. 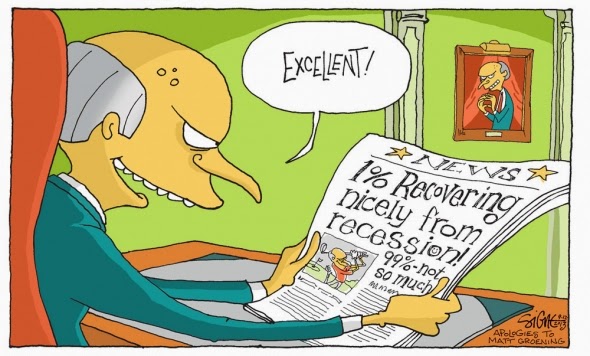 For my money, I would add that the poll is telling us Americans intuitively understand that those who benefited most from the 2008 market bailout need to stop pretending they actually earned their taxpayer-backed bailout profits and bonuses.

Specifically, 56 percent of Americans agree with President Obama's proposal to increase the capital gains tax on households making more than $500,000 per year, with only 16 percent opposed. In simple terms, the AP-Gfk poll says Americas wealthiest class needs to start pitching in so we can rebuild the nation-state.

You can read poll questions and results here.