If you want to understand the genesis of our current budget and debt mess let's start with this simple fact: The richest Americans have been paying far less in taxes than they did in the past. At the same time they're getting far more than they should in the form of bailouts, subsidies, and other favorable legislation from Washington.

Worse, America's richest class is getting support for their "Get-Out-of-Taxes-Free" card from a deluded middle class, who are egged on by an equally delusional group of Tea Baggers, who have bought into the bankrupt idea that if the rich pay less the country is better off. 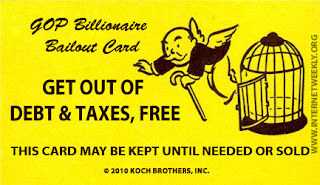 While I've been saying this for a while now, the Guardian's Richard D. Wolff points out that the richest Americans have dramatically lowered their income tax burden since 1945, and really kicked it down when Ronald Reagan became president. In the process America's quality of life and it's ladders of upward mobility have been tightened and cut. 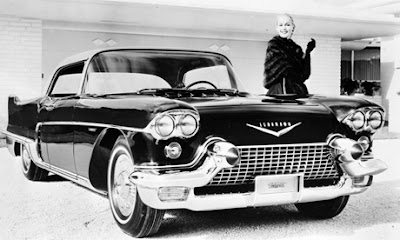 In fact, the marginal tax rate (what's on the books) on the highest wage earners dropped from a high of 90% in 1945 to about 70% under JFK, and fell dramatically to around 30% when Ronald Reagan was ready to leave office. Check it out ... 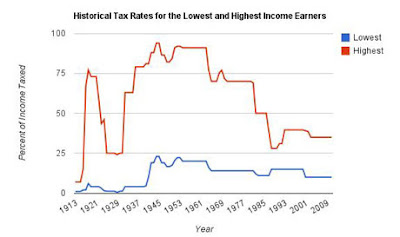 Because of this development the amount of taxes actually paid (the "effective" tax rate) by America's individual millionaires and corporate giants has dropped precipitously ... 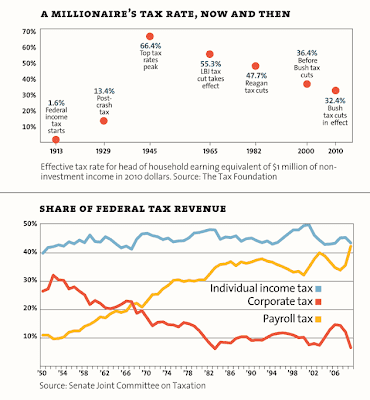 ... while the share of taxes paid by middle class America has soared. In sum, we have seen a scissors effect when it comes to burden sharing and tax payments.


The False Justification Behind Tax Cuts for the Rich
As I've been pointing out for some time now, the rich justify cutting their taxes by claiming that they will invest the money they save from not paying more taxes. This, in turn, will create more jobs. Their "the-wealth-will-trickle-down" argument has been debunked over and over again (Reagan was famously called out on it by the first President Bush, who referred to his policy proposals as "voodoo economics" during the 1980 primaries). Yet they persist in perpetuating the "cut taxes, more revenue, more jobs" myth.

What's actually happened after 30 years of trickle down economics is entirely different. Check it out.


* NATIONAL DEBT EXPLODES / MORE BORROWING: Over the past 30 years the wealthiest Americans have seen their share of taxes drop dramatically while America's national debt has climbed from about $975 Billion in 1980 to $14 Trillion today. Yet, the Republican Party and many (clueless) middle class Americans want to continue cutting taxes on corporations and America's richest class - as if it's patriotic to continue borrowing from the Chinese so we can pay for tax cut refunds to gazillionaires who don't need it. Simply mind boggling.

* SOVEREIGNTY UNDERMINED: As Wolff points out, the richest Americans take the money they save from taxes and invest big parts of it in China, India, and elsewhere. This produces more jobs over seas, but fewer jobs here. Worse, since we don't build things here any more we have to import more goods from abroad. Our balance of trade suffers, which means we send more dollars out - which the Chinese and others conveniently lend back to us. Nice.

* INCENTIVES / MARKETS DISTORTED: According to Wolff the richest Americans take the money they don't pay in taxes and invest gamble it in hedge funds and with stockbrokers who aren't necessarily concerned about the public good. Hedge funds and brokers use part of the money rich people save from taxes to speculate in the US stock markets, which benefits them in the immediate term because they own most of America's stock (look for the stock dump later). Worse, according to Wolff, in our current market environment brokers are often speculating in oil and food, which drives up their prices and undermines economic recovery.

Apart from getting much richer over the last half-century, we are now in the middle of an epic market meltdown that has seen Wall Street experience both record bailouts and record profits (there's an Orson Welles "Newspeak" quote in there somewhere). The average American, however, has seen their quality of life and standard of living take a hit in the form of greater uncertainty and less wealth. 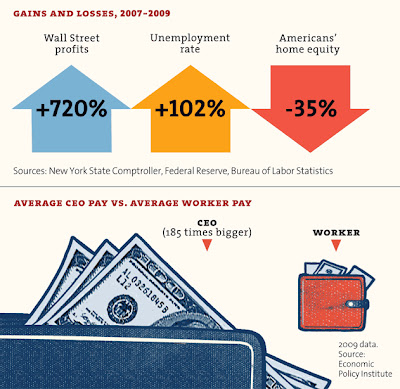 The Political Impact ... A Nation of Morons?
At the end of the day, as we have reduced taxes on the rich in America we have seen economic incentives distorted, government services cut, and worsening inequality (of income and opportunity) in America over the the past 30 years.

Ironically, many Americans are missing the connections between 30 years of trickle down policies and these developments. As if tax cuts, tax write-offs, bailouts, subsidies, and other market distorting legislation that favors the rich has no impact on society. And it show in our politics. In many ways, we've become a nation of morons. And we have Fox News to prove it. 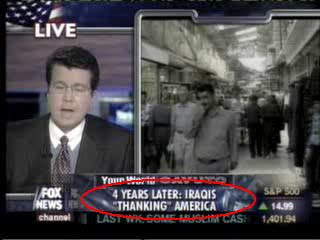 As Wolff points out, "a rather vicious cycle has been at work for years." But many Americans simply don't understand it. Because the rich have seen their taxes reduced they now have more money to influence politicians and politics. This influence "wins them further tax reductions, which gives them still more money to put to political use." Because government has lost revenue from 30 years of cutting taxes for the rich public services have become increasingly strained, while public debt has climbed.

But instead of calling for a return to the past, when the rich paid a greater share of their income - as Adam Smith argued they should - the rich constantly press politicians to cut public services and government jobs (and their taxes). Tea Baggers and other clueless middle class Americans, like lemmings jumping off a cliff, simply follow ... all the while mumbling about greedy public servants. 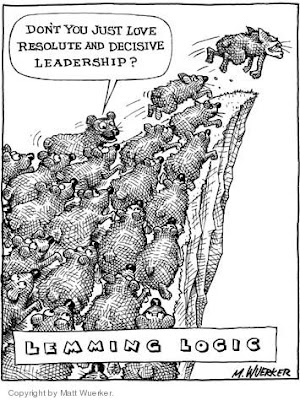 My friends, we're broke, and we're broke for a reason. We're not going to solve our financial problems by going after the chump change that public servants make. There are other options. But first we have to reverse 30 years of trickle down economics, which means we have to stop giving away the tax farm to the rich.