FREE COLLEGE TUITION? NOT ON YOUR LIFE ... GO TO WAR AND EXTEND BUSH TAX CUTS? NO PROBLEM 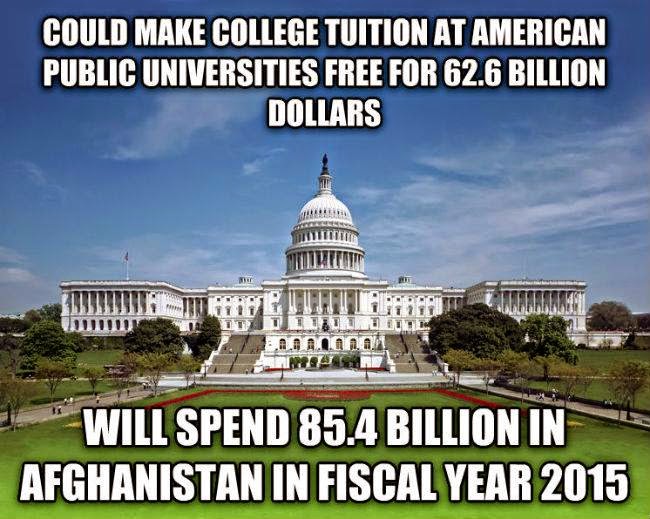 Let's assume states continue funding state colleges at the rate they do today. If they did, according to the Atlantic Monthly, it would cost the federal government about $62.6 billion to make college free for every student attending a public university in America.

If we can spend $85.4 billion fighting in Afghanistan, we should be able to find $60 billion to help educate our nation's future.

Want to know what else costs us $60 billion?

Tax loopholes for U.S. corporations cost us about $60 billion.

We could feed the world for two years with $60 billion.

We could build high speed rail in Colorado for $60 billion, twice.

ADDENDUM: One more thing. To date, the bailout of Wall Street has cost us $4.76 trillion, and counting. To put this in perspective, for what we've put into bailing out Wall Street we could have paid for America's college students to attend our public universities for free for the next 50 years, and still have well over $1 trillion left over for investments in our nation's infrastructure. Think about that for a moment.
Posted by Mark A. Martinez at 9:40 PM