TRUMP'S SUPPORTERS, INTELLECTUALLY COHERENT OR DELUSIONAL SOCIOPATHS? YOU BE THE JUDGE ...

Once again, it's necessary to address Donald Trump's Alternative Facts "anything goes, as long as I believe it" universe ...

Let's start with this. Simply put, there are objective truths in our world, which allow us move forward as a community, as a society, and as a nation. Finding cures for polio and other once ordinary diseases are a product of finding objective truths.

Let me explain how this works, with a reference to education.

As I noted seven months ago, there are objective truths in education.


* By the time a kid enters Kindergarten they should be able to color between the lines.

* By the time you leave middle school, you should understand that, no, the sun does not revolve around the earth.

If we understand these agreed upon, peer-reviewed, truths, then we can understand that, yes, there are objective truths in our world. What this means is that, just as there are good sources and bad sources - and real universities and fake universities (think Trump University) - we should know there are ways to distinguish between fact and fiction.

If we understand this we can begin to understand why arguments that begin with "Rush Limbaugh or Breitbart reported ..." are not going to be acceptable answers. Simply put, the political equivalent of "leventeen" should not be an acceptable response, or the basis for a belief system.

And, yes, Rush Limbaugh and Breitbart (and Fox News) put out the political equivalent of "leventeen" every day. And the base, unfortunately, eats it up. 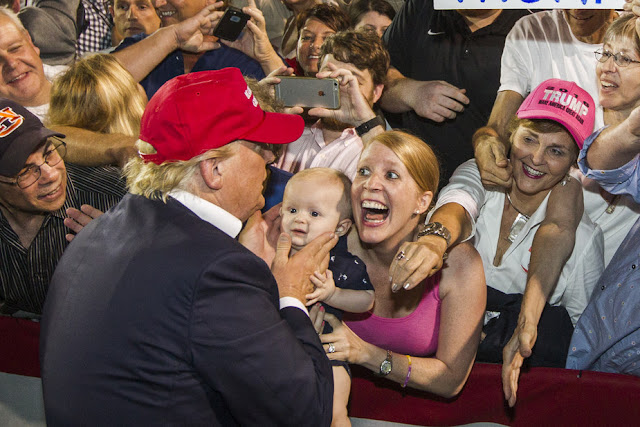 Unfortunately, many of Donald Trump's supporters ignore these simple guidelines because it doesn't fit the narrative of the world they want to see. Need an example? OK, check out what's happening with Trump's supporters when it comes to Russia, and the issue of speech in America (which was supposed to have been settled after the American Revolution with the 1st amendment).

I CAN SEE RUSSIA FROM TRUMP TOWERS ... "NYET"
If you want to know how deranged and out of touch Trump's supporters are check out the findings of these two polls.

First up, via Alternet.com we learn about a new survey from Public Policy Polling that shows:


Not surprisingly, from the same PPP survey we learn that only 24% of Trump voters think an investigation into the Trump's campaign collusion with Russia is necessary, while 64% oppose having one.

But the real indicator that Trump voters are seriously delusional is that 77% of his supporters believe that even if there were an investigation, and it found that the Trump campaign did collude with Russia to aid his campaign, they still believe Trump should stay in office.


TO HELL WITH THE 1st AMENDMENT
Then we have these stories from New Yorker Magazine's Daily Intelligencer. No doubt taking their cue from Donald Trump, who called the media the "enemy of the American People," a YouGov/Economist poll found that Trump's supporters don't really care for protecting the constitutional pillars of our society. Specifically, the YouGov/Economist poll found:


* 55% of Republicans believe "the courts" should be allowed to “fine news media outlets for publishing or broadcasting stories that are biased or inaccurate.”

* 45% of Republicans say that the judiciary should have the power to “shut down” biased media organizations.

You don't have to be a rocket scientist to know that Fox, Breitbart, and other right-wing noise outlets are probably not what Republican respondents had in mind for closure, or fines.

The real question is, how do we know what constitutes "biased" or "fake" news? This is where it gets scary. According to a Politico/Morning Consult survey, for many Republicans the line between fact and fiction depends on where Donald Trump tells them it is. Really.

There's more, but let me end with this nugget. Incredibly, 49% of Trump's supporters actually believe he won the popular vote.

(For the Trump supporters who might still be reading this, Trump lost the popular vote by 3 million!)

At the end of day, these are seriously delusional people. Arguing points of logic with them won't work. Presenting facts won't work. Only "leventeen" seems to work ... but it has to be their leventeen. Make that leventeen-thousand.