JUST ANOTHER WEEK IN TRUMP'S GUTTER


Have you ever wondered what a being "unpresidential" looks liked? I know, I know ... that's too easy. We all know it looks like Donald Trump.

Seriously. What else can you say about a syphilitic-addled mind that blurts out, with the exception of "the late, great Abraham Lincoln," that he could easily act "more presidential than any other president in history."

This is a sick man.

But wait, it gets worse.

At his "make America great" [**Bavarian beer hall**] rally Donald Trump compared the United States to a nation under wartime occupation. Feeding the political vultures that thrive on the fear and division Trump so easily dishes out, Trump claimed that illegal immigrant gangs (read: people of color) are now going after young beautiful girls - as if it were a daily occurrence - and cutting them up because the gangs want them to experience more pain.

This was followed up with Trump going back on a campaign promise (surprise there, right). He just announced he was going to reinstate the transgender military ban so that transgender Americans can no longer serve, in any capacity, in the United States military (which brought this transgender Navy SEAL response).

None of this should be a surprise to anyone. Trump's been on (another) very unpresidential roll this week. 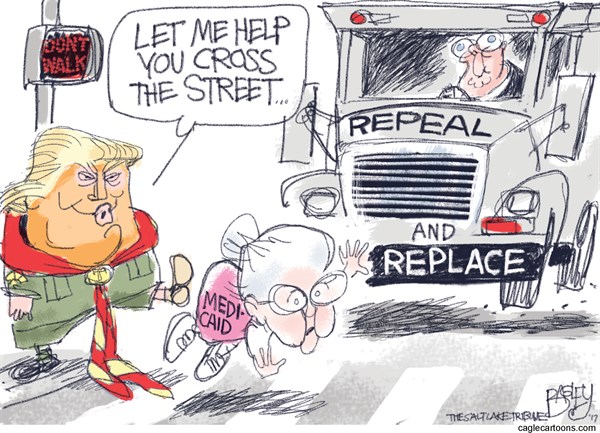 As the LA Times' David Horsey pointed out, when Donald Trump addressed thousands of Boy Scouts at the National Scout Jamboree on Monday, he turned it into a "mean-spirited, boastful, bullying speech that failed to live up to the values to which Boy Scouts aspire."

Apart from mocking President Obama (who was a Boy Scout), and making it clear that he wanted to repeal Obamacare, Trump effectively turned a values reaffirming Jamboree into a mini political rally filled with a spirit of ridicule and division. Closing out his Times article Horsey didn't mince words:


Trump has no idea how to be presidential. He treats the White House like a branch of the family business. In the style of a Mafia don, he expects Cabinet officials and lawmakers to put loyalty to him above respect for the law and the Constitution. His tweets and most of his unscripted public statements are undignified, untutored and frequently unhinged.

So, yeah, rather than appealing to the values of the Boy Scouts Trump dragged the entire event through his dark mind, and into his political gutter. Unfortunately, Trump's Jamboree comments are par for the course since, you know, this is exactly what Trump's been doing with America since he became president. The real scary part here is that more and more Americans are getting accustomed to the gutter background noise, and the Bavarian Beer Hall-like rallies, that come with Trump.