CATERING TO WHINERS ... OR JUST GUTLESS?

The next time you hear some Fox News talking head, or one of their many citizen drones, lament how Republicans have been cut out of the health care debate remind them of these two facts. In the spirit of bi-partisanship ...

Fact #1: Democrats threw out the public option with little or no fight.

Fact #2: Out of 210 Republican amendments submitted and considered by Sen. Christopher Dodd's Health, Education, Labor and Pensions committee, only 49 were rejected.

That means 161, or more than 75% of, Republican health care amendments were accepted by the Democratic Party. Yet not a single Republican voted to support the legislation. And now all they do is cry and whine about being excluded from the process. 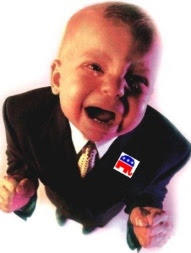 Sounds to me like we can cut 161 sections/amendments out of Sen. Dodd's committee bill on health care (and then send the GOP to bed without supper).

There's more on what the Democrats have compromised on gutlessly caved in to here.

I believe the Democrats are playing the roll of an unfit parent. Catering to her spoiled child who is used to getting everything he wants. And I'm talking about the fussy kids that don't know what they want. The one that cries for toy #1, when mom hands it to him, he throws it back at her and begins to cry. Mom continues to console him while filled with frustration not knowing what to do. What a fit mother would do is let him cry until he realizes, "This crying is not working. I better behave if I want her to listen to me."