The Bush administration is taxing the hell out of America. And they’re doing it the same way medieval monarchs and petty tyrants have done it through the ages – by forcing you and I to cover their debts. Here’s how it happens. 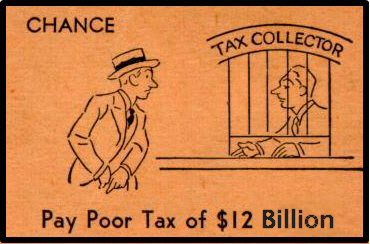 Whenever you create or produce too much of anything its value goes down. Today America prints and spends more dollars than we can back with the goods we produce (or the gold we have on hand). Hence, the value of the dollar has gone down. This is how President Bush’s policies make this situation worse.

Since George W. Bush came into office we have added over $3.8 Trillion to the national debt. Today we owe roughly $9.4 Trillion (when Jimmy Carter left office we owed about $979 billion).

Every time President Bush spends money we do not have he's telling the American taxpayer "I'm irresponsible. But you still have to pay this back ... today and well into the future." This, my friends, is a hidden tax.

But it’s also the simple part of our hidden tax.

As the Bush administration continues to send dollars out to the rest of the world the value of the dollar declines. Over time people and countries, like our rich Arab friends, who use the dollar to purchase stuff eventually start looking around and say to themselves, “Hey, this Lexus costs me more in dollars.” But they can’t really complain because our Japanese friends are saying, “There are too many dollars out there. They are not worth as much today. Let’s raise the price of our Lexus.”

Our Arab friends, in turn, raise the price of their product (in this case, oil) so they will have more dollars to buy the Lexus they want. This helps to explain the surge in gas prices (and rising prices elsewhere).

The fact that Americans have to fork over more money – for petroleum and a Lexus (among others) – is a direct result of the falling value of the dollar. Simply put, rising prices (or inflation) constitutes a “hidden tax” on the American consumer. 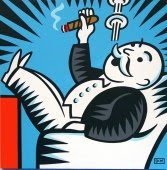 The worst part? The hard-working American consumer is paying this hidden tax so President Bush can pursue his Blundering Wars Project and, incredibly enough, so he can cut taxes on his rich friends.

John McCain, and the Bush administration, are banking on the fact that Americans won't figure this out.