DOES THE "GREAT WHORE" STILL LIVE? 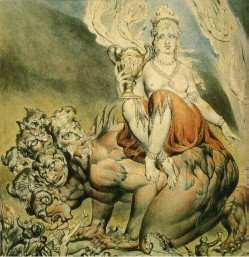 Well, it looks like “veteran bigot” and McCain supporter extraordinaire John Hagee is apologizing to the Catholic League’s Bill Donohue.

Hagee, who has called Catholicism the “great whore” and the “apostate church,” now says he has “an improved understanding of the Catholic Church, its relation to the Jewish faith, and the history of anti-Catholicism.” He also recognizes now that the terms he used were a “rhetorical device” that are not “synonymous with the Catholic Church.” Here’s his letter.

While the McCain camp – and Hagee – deny McCain’s presidential bid had anything to do with Hagee’s new insights, common sense and political strategy says otherwise.

Specifically, we know that if Hagee’s history of ignorance and bigotry were pasted all over the media like Rev. Wright’s comments, there’s the chance that McCain’s candidacy could be derailed. If that happened how could Hagee and his followers get to Heaven? Someone has to start Armageddon.

And then there’s the issue of Hagee’s sudden change of heart going beyond his letter to Donohue and the Catholics.

I'm not sure, but it seems to me that Hagee's “great whore” still lives.