TIME FOR A LOYALTY OATH? 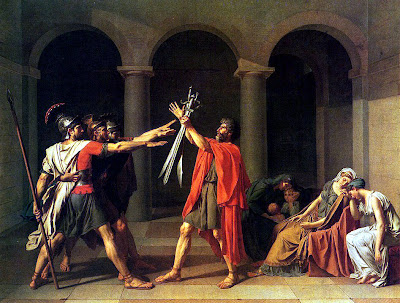 This morning I was channel-flipping as I was getting dressed and saw the press hanging the Rev. Jeremiah Wright around Obama's campaign - as if God Himself had made Wright Obama's VP running mate.

This anti-Wright fervor, with its reckless accusations, and guilt by association is reminiscent of McCarthyism. It's also a petty and pathetic display of double-standards by our nation's media. Worse, it's the media's way of saying "We don't understand the role of the church in Black America ... So, yes, we're going to make this an issue."

On the other side of the isle we have John McCain who openly accepts - and gets a free pass from the press on - the support of right-wing nut job, and Apocalyptic End-of-Times instigator John Hagee. Let's take a look at some of Pastor Hagee's views:

• On Women: “the difference between a terrorist and a woman? You can negotiate with a terrorist.

• On Catholicism: The “Great Whore” and a “false cult system”

• On Katrina: New Orleans “had level of sin that was so offensive to God” ... “there was to be a homosexual parade there on the Monday that Katrina came” ... “they were the recipients of the judgment of God for that” ...

Still, John McCain is "very honored" to have Hagee's support, while Barack Obama has to back-peddle and distance himself from Rev. Wright, a man who served his country honorably in the military. Unbelievable.

And let's not forget what Hagee believes, and wants: A nuclear confrontation with Iran, which is a precondition for bringing on Armageddon. This makes John McCain, with his famous temper, the perfect candidate for people like Hagee.

Forget the level of ignorance and hubris necessary to believe that someone like Hagee can force his vision of Armageddon down God's throat. Let's focus on this: These guys want to bring destruction and despair to the United States, and the world. Does advocating the destruction of the U.S., in a religious war of dubious intent, sound like a "subversive" act to anyone else but me?

Since our president is so keen on national security perhaps it's time for a loyalty oath (republicans are already familiar with them). You know, something like this:

"Do you swear to support the Constitution and protect this nation above all other personal and religious affiliations?"

Pretty simple, don't you think? We can start with the Muslims ... you know, to make the John Hagees of the world feel better.