The President criticized Democrats in Congress today for barring oil drilling on the Alaskan tundra. If he thinks that will bring down oil prices, he's even farther out of his mind than I feared. Even if such drilling were environmentally safe (and it's not -- remember BP?) it would amount to a miniscule addition to global oil supples.

Reich's also on to the Snake Oil that Hilary and the increasingly out of touch McCain are pitching.

So what else can we do? McCain and HRC are proposing a tax holiday on gas - so this summer you wouldn't pay the 18 cents a gallon that would otherwise go to Uncle Sam. Talk about dumb ideas. This will only encourage Americans to drive more, thereby increasing demand and causing gas prices to rise even higher ... It's a cheap political gimmick that does nothing to stem the rising price of oil.

You want to hold oil prices down? In the short term, strengthen the dollar. Part of the reason oil prices are soaring is because the dollar is tanking [which we discussed on Saturday]. The Treasury and financial ministries of other rich countries should buy back dollars to stop speculators who are bidding the greenback down.

Over the longer term, though, China and India's insatiable demand for oil will continue to drive oil prices up, and turmoil in the Middle East will keep them up. So there's really only one way for us to go: Alternative sources of energy - wind, solar, biomass, water, and if we can make it safe enough, nuclear.

The only drawback is that there's too much commons sense involved. It might even force the Bush administration to answer for its history of saying one thing on alternative energy while doing another - like gutting renewable energy programs.

But that's alright. I'm sure OPEC and/or these two guys will figure it out for us, right? (and, yes, that's Venezuela's Hugo Chavez). 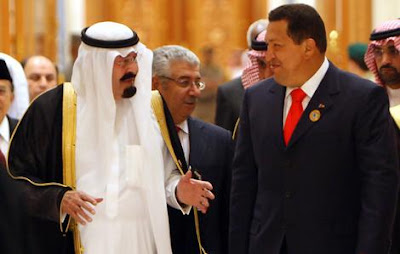