COULD REAGAN WIN IN TODAY'S GOP? 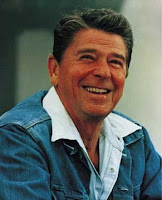 By way of Daily Kos … Arianna Huffington has the goods on potential GOP fontrunner Mike Huckabee: He’s a Christian dream come true but, strangely, influential insiders are suddenly wary of an "overdose of public piety" and "scriptural literalism” in the White House. Hmmmm. Could the concern over Huckabee’s sudden ascent be due to the fact that the “religious right base is supposed to be seen, not heard. Candidates are supposed to pander to this crowd, not actually come from this crowd."

I wonder if our old friend Ronald Reagan could rise in this party, this environment. Not a regular churchgoer, said he experienced God riding his horse at the ranch, divorced, relaxed about the faiths of his friends and aides, or about its absence. He was a believing Christian, but he spent his adulthood in relativist Hollywood, and had a father who belonged to what some saw, and even see, as the Catholic cult. I'm just not sure he'd be pure enough to make it in this party. I'm not sure he'd be considered good enough.

Arianna’s closer says it all: "Whatsoever a man soweth, that shall he also reap."