Rosina Lozano published an article in the Los Angeles Times explaining why "Spanish has never been a foreign language in the United States." The piece is full of history lessons and, more importantly, provides the context for understanding how the United States was not founded as an English-only nation-state. 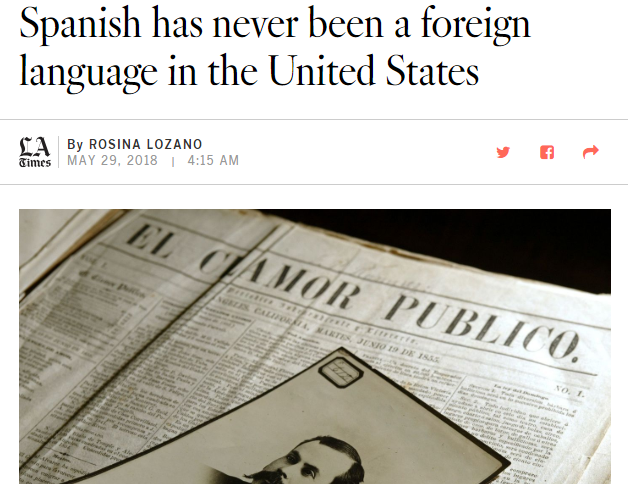 When we dig deeper, we learn that because of colonial policies, and the mercantilist policies of the British, coining currency and the possession of precious bullion was strictly controlled. British currency was hard to come buy. So one of the most common currencies accepted in colonial and post-revolutionary America was the Spanish Real.

And why not? The Spaniards had literally hit the mother lode in Mexico and South America, and there was plenty of bullion loaded coins to go around.

Because the Spanish Real could be cut up into eight pieces, or eight bits, each piece was accepted in commercial transactions because of the bullion content that the Spanish currency contained. As a result American colonialists began using "bits" to refer to the Pieces of Eight that came from the Spanish Real.

Today, "two bits" - which once referred to 25% of a real - is now a folksy (or colloquially) accepted reference to 25 cents in America.

How important was the Spanish Real and the pieces of eight (and two bits) reference? It's worth noting that the New York Stock Exchange listed stock prices in "eighths of a dollar" units until 1997.

The mustang is often characterized as uniquely American too (especially the car). But mustang has its etymological roots in the Spanish and Mexican settlement of the Americas, and especially in the American southwest. Specifically, el mestengo refers to a horse (or cattle) that was either "wild" or  had "no master." In effect, a mustang was a free range horse in the Americas (i.e. in both North and South America).

As well, the uniquely American "cowboy" didn't come out of nowhere. It's roots are tied to the Spanish language. The workers who worked the haciendas and went after los mestengos were called vaqueros, or cowboys.

Ever go to a rodeo? There's no English language derivative for this one. But in Spanish rodear means to surround or encircle (or "roundup" in South America)

Finally, remember the border agent who stopped the two women who were speaking Spanish in Montana?  Think about it. Montaña means "mountain" in Spanish. So, yeah, Montana is an English garbled derivative of Montaña.

This is what happens when you get federal agents with a two bit education (yeah, two bits can also refer to something that is cheapened or depreciated, but that's another story for another day).

There's more to this story. But let's remember one thing. Spanish, and our history with Spain and Mexico, is what makes America uniquely American.