COUNTING YOUR CHICKENS BEFORE THEY'RE HATCHED ... IT'S AN ART FORM WITH THE GOP 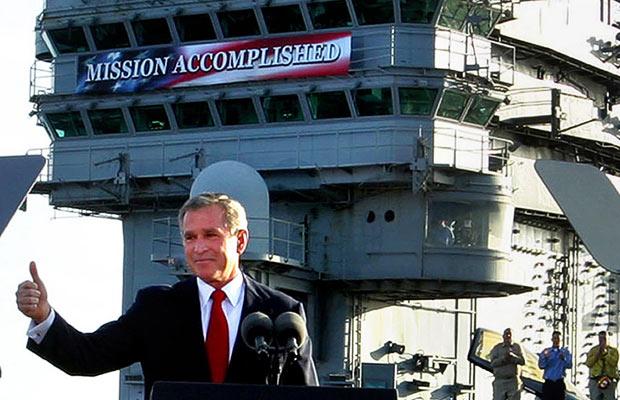 That was 15 years ago, in 2003. It was George W. Bush trying to take credit for ending major hostilities in Iraq, while suggesting that victory in Iraq (and the Middle East) was right around the corner.

In case you missed it, Iraq is not a democracy, and we're still stuck in the Middle East. And Iraq is one of the major reasons we have ISIS and the rest of the mess we have in the region.

Rather than a bunch of victory chickens crowing success, President Bush's basket of 'victory' eggs ended up on his face, as it were.


Yeah, the picture above shows the commemorative coin the White House decided to put out in advance of the U.S.-North Korean "Peace Talks" Donald Trump crowed about. You remember the talks. Donald Trump's Fox News-adled supporters were telling the world the planned talks made Trump an immediate candidate for the Nobel Peace Prize.

Hence the commemorative coins. They were going to sell like hotcakes once Trump stared Kim Jong Un down, and got his Nobel award.

Unfortunately, Team Trump undermined the proposed talks by suggesting Kim Jong Un cave into unrealistic demands (unilaterally dump his nukes). They also wanted the North Koreans to pretty much put Trump on a diplomatic pedestal before the talks began, so Trump could be feted around as if he were some kind of conquering tribal king.

As you can imagine, with VP Pence saying Mr. Kim would share the same end as Muammar Qadaffi if he didn't go along with their demands - which led to Pence being called a 'political dummy' by a high ranking North Korean official - the summit environment between Trump and Kim Jong Un suddenly became tense. Once Trump realized his negotiating tactics were making things worse, and that he was going to get nothing from the meeting, he canceled the talks.

Who could see that coming? (Well, pretty much the entire world saw that coming.)

And you wonder why the prestige and respect the U.S. once had around the globe is in the toilet.

But at least we have a commemorative coin to capture the moment, right? And let's not forget that Nobel Peace prize Trump's supporters were already throwing around like some kind of PR trophy.

A worthless coin and an imaginary trophy. So much winning. ** cough, cough **

At the end of the day, nothing says counting your chickens before they're hatched than a Republican president trying to capture the glory of war and diplomacy before victory and peace break out.

So, yeah, it's true. MAGA ... Morons Are Governing America.

With the Trump administration, the stupidity never ends.