The fact that Kern County is being forced to redraw its supervisorial district map puts it right in the middle of America's longer history of trying to get democracy right. It also offers us an opportunity to peek into our checkered history of redistricting, voting, and the broader struggle for civil rights in America. What follows below begins with a brief lesson in redistricting, then takes a look at the broader struggle for representation and the right to vote in America.

In 1961 a Republican mayor in Tennessee, Charles Baker, sued the state, arguing Tennessee’s legislative and congressional districts had not been redrawn since 1901. The failure to redraw districts created a numerical imbalance between districts since, as Baker argued, many more people had moved from the countryside to the cities, which put far more people in some districts.

The Warren Court and Baker v. Carr
On March 26, 1962 – 56 years ago – with Bakersfield native Earl Warren presiding, the U.S. Supreme Court ruled in Charles Baker’s favor. The Warren Court argued that a “citizen’s right to a vote free of arbitrary impairment by state action has been judicially recognized as a right secured by the Constitution.” The Warren Court ruled this is especially the case when the right to vote has been undermined by a “false tally” caused by faulty or unrepresentative district lines.

Warren would later add that we vote for people "not rocks and trees."

In a few words, Judge Drozd struck down the Kern County Board of Supervisors 2011 redistricting map, arguing the district lines failed to create a county election system “equally open to participation by Latino voters” as mandated by the 1965 Voting Rights Act.

In effect, Judge Drozd said that Kern County had created supervisor districts that represented a false tally, and told Kern County to come back with another, more representative, plan.

To understand the importance of Judge Drozd’s ruling, and how it fits into our country's long and contentious history with getting democracy right, it's necessary to recall the divisive political battles and hard fought legal decisions that are an integral part of America’s evolving democratic experiment.

America's Evolving Experiment in Democracy
As we all learned in grade school, the concept of one man one vote wasn't always embraced in our nation’s history. Originally, only white male landowners were granted the franchise. This would be changed later to allow all white males the right to vote.

Jump forward to 1920, and women finally got the right vote with the 19th amendment. Thirty-five years later, with Martin Luther King, Jr. leading the way, the civil rights movement of the 20th century would take off, and the cruel façade of representation for African-Americans would finally begin to lift.

After Baker v. Carr compelled southern states to take redistricting seriously, the passing of the Voting Rights Act would force states to remove “tests” and other hurdles (like poll taxes) to voting, which helped make the American voting experience more representative and democratic.

When 18-year-olds, who had been fighting and dying in Vietnam without the right to vote, were finally granted the franchise in 1971 (26th amendment), the American experiment in democracy had finally been squared.

To get an idea of how important the 15th, 19th and 26th amendments are to the idea of representation and democracy in America, below is a map of how the 2012 presidential election would have turned out without African-Americans, women, and 18-year olds voting. Simply put, it's Romney in a landslide. 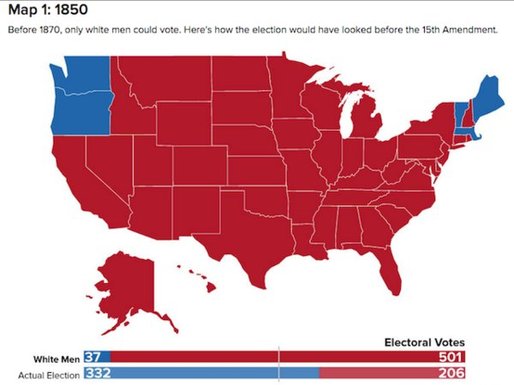 Concluding Thoughts
Expanding the franchise, and fixing past wrongs, has always been part of the American political experience. While bringing more people into our democratic tent hasn’t always been pretty, nor accepted by those with economic clout or in positions of political authority, this is the way our system of checks and balances is supposed to work.

In this light, Judge Drozd’s decision (MALDEF v. Kern County Board of Supervisors), falls squarely in line with America’s long and contentious history of correcting past electoral imperfections. Specifically, Judge Drozd’s ruling forces Kern County’s Board of Supervisors to redraw supervisor boundaries to account for our changing demographics, and should be viewed as a significant contribution to the larger “arc of justice” Dr. Martin Luther King, Jr. spoke of during his life.

Between today and tomorrow, Kern County’s Board of Supervisors are supposed to come out with a new county supervisor map, as mandated by Judge Drozd's decision. With only one supervisor, Leticia Perez, clearly committed to abiding by Judge Drozd's ruling, we'll soon find out whether Kern County becomes yet another symbol of all that is wrong with politics in America, or whether we're finally stepping into the 21st century.


Two of the Kern County district supervisor maps proposed by MALDEF, and the Dolores Huerta Foundation.