AND WE WONDER WHY THEY HATE US ...

What Chalmers Johnson called blowback certainly applies in Iraq. The unintended consequences of events that we kept hidden from the American people has certainly blown up in our face when we look at the festering disaster in the Middle East today. The invasion of Iraq was never about Saddam Hussein being one of the perpetrators of the 9/11 terrorist attack, as the Bush administration claimed. It was never about Saddam's weapons of mass destruction (WMDs) program, which he didn't have. And it certainly wasn't about the oh so scary "nuclear hand off" to Osama bin Laden. No, George W. Bush and the GOP were trying to play master of the universe in the Middle East, lied to the American public about it, and then screwed up the aftermath, big time.

What's happened in Iraq since we invaded the country 15 years ago today is a tragedy, and outlined in the NY Times op-ed below. 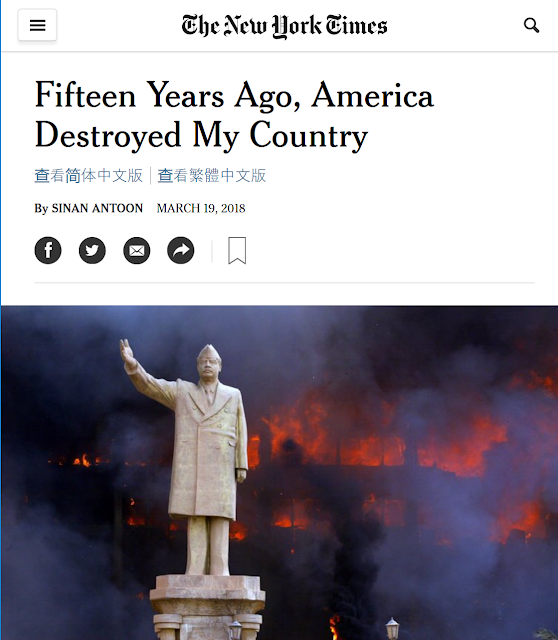 When I was 12, Saddam Hussein, vice president of Iraq at the time, carried out a huge purge and officially usurped total power. I was living in Baghdad then, and I developed an intuitive, visceral hatred for the dictator early on. That feeling only intensified and matured as I did. In the late 1990s, I wrote my first novel, "I'jaam: An Iraqi Rhapsody," about daily life under Saddam's authoritarian regime. Furat, the narrator, was a young college student studying English literature at Baghdad University, as I had. He ends up in prison for cracking a joke about the dictator. Furat hallucinates and imagines Saddam's fall, just as I often did. I hoped I would witness that moment, whether in Iraq or from afar.

I left Iraq a few months after the 1991 Gulf War and went to graduate school in the United States, where I’ve been ever since. In 2002, when the cheerleading for the Iraq war started, I was vehemently against the proposed invasion. The United States had consistently supported dictators in the Arab world and was not in the business of exporting democracy, irrespective of the Bush administration’s slogans. I recalled sitting in my family’s living room with my aunt when I was a teenager, watching Iraqi television and seeing Donald Rumsfeld visiting Baghdad as an emissary from Ronald Reagan and shaking hands with Saddam.

That memory made Mr. Rumsfeld’s words in 2002 about freedom and democracy for Iraqis seem hollow. Moreover, having lived through two previous wars (the Iran-Iraq war of 1980 to 1988 and the Gulf War of 1991), I knew that the actual objectives of war were always camouflaged by well-designed lies that exploit collective fear and perpetuate national myths.

I was one of about 500 Iraqis in the diaspora — of various ethnic and political backgrounds, many of whom were dissidents and victims of Saddam’s regime — who signed a petition: “No to war on Iraq. No to dictatorship.” While condemning Saddam’s reign of terror, we were against a “war that would cause more death and suffering” for innocent Iraqis and one that threatened to push the entire region into violent chaos. Our voices were not welcomed in mainstream media in the United States, which preferred the pro-war Iraqi-American who promised cheering crowds that would welcome invaders with “sweets and flowers.” There were none.

The petition didn’t make much of an impact. Fifteen years ago today, the invasion of Iraq began.

Three months later, I returned to Iraq for the first time since 1991 as part of a collective to film a documentary about Iraqis in a post-Saddam Iraq. We wanted to show my countrymen as three-dimensional beings, beyond the binary of Saddam versus the United States. In American media, Iraqis had been reduced to either victims of Saddam who longed for occupation or supporters and defenders of dictatorship who opposed the war. We wanted Iraqis to speak for themselves. For two weeks, we drove around Baghdad and spoke to many of its residents. Some were still hopeful, despite being drained by years of sanctions and dictatorship. But many were furious and worried about what was to come. The signs were already there: the typical arrogance and violence of a colonial occupying power.

My short visit only confirmed my conviction and fear that the invasion would spell disaster for Iraqis. Removing Saddam was just a byproduct of another objective: dismantling the Iraqi state and its institutions. That state was replaced with a dysfunctional and corrupt semi-state. We were still filming in Baghdad when L. Paul Bremer III, the head of the Coalition Provisional Authority, announced the formation of the so-called Governing Council in July 2003. The names of its members were each followed by their sect and ethnicity. Many of the Iraqis we spoke to on that day were upset with institutionalization of an ethno-sectarian quota system. Ethnic and sectarian tensions already existed, but their translation into political currency was toxic. Those unsavory characters on the governing council, most of whom were allies of the United States from the preceding decade, went on to loot the country, making it one of the most corrupt in the world.


We were fortunate to have been able to shoot our film in that brief period during which there was relative public security. Shortly after our visit, Iraq descended into violence; suicide bombings became the norm. The invasion made my country a magnet for terrorists (“We’ll fight them there so we don’t have to fight them here,” President George W. Bush had said), and Iraq later descended into a sectarian civil war that claimed the lives of hundreds of thousands of civilians and displaced hundreds of thousands more, irrevocably changing the country’s demography.

The next time I returned to Baghdad was in 2013. The American tanks were gone, but the effects of the occupation were everywhere. I had low expectations, but I was still disheartened by the ugliness of the city where I had grown up and horrified by how dysfunctional, difficult and dangerous daily life had become for the great majority of Iraqis.

My last visit was in April 2017. I flew from New York, where I now live, to Kuwait, where I was giving a lecture. An Iraqi friend and I crossed the border by land. I was going to the city of Basra, in the south of Iraq. Basra was the only major Iraqi city I had not visited before. I was going to sign my books at the Friday book market of al-Farahidi Street, a weekly gathering for bibliophiles modeled after the famous Mutanabbi Street book market in Baghdad. I was driven around by friends. I didn’t expect the beautiful Basra I’d seen on 1970s postcards. That city had long disappeared. But the Basra I saw was so exhausted and polluted. The city had suffered a great deal during the Iran-Iraq war, and its decline accelerated after 2003. Basra was pale, dilapidated and chaotic thanks to the rampant corruption. Its rivers are polluted and ebbing. Nonetheless, I made a pilgrimage to the famous statue of Iraq’s greatest poet, Badr Shakir al-Sayyab.

One of the few sources of joy for me during these short visits were the encounters with Iraqis who had read my novels and were moved by them. These were novels I had written from afar, and through them, I tried to grapple with the painful disintegration of an entire country and the destruction of its social fabric. These texts are haunted by the ghosts of the dead, just as their author is. No one knows for certain how many Iraqis have died as a result of the invasion 15 years ago. Some credible estimates put the number at more than one million. You can read that sentence again. The invasion of Iraq is often spoken of in the United States as a “blunder,” or even a “colossal mistake.”

It was a crime.

Those who perpetrated it are still at large. Some of them have even been rehabilitated thanks to the horrors of Trumpism and a mostly amnesiac citizenry. (A year ago, I watched Mr. Bush on “The Ellen DeGeneres Show,” dancing and talking about his paintings.) The pundits and “experts” who sold us the war still go on doing what they do. I never thought that Iraq could ever be worse than it was during Saddam’s reign, but that is what America’s war achieved and bequeathed to Iraqis.