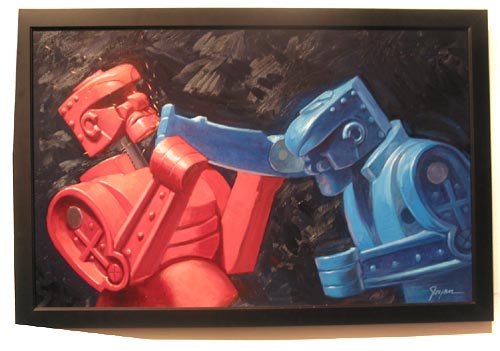 From time to time I get into e-mail exchanges with friends and colleagues that help me understand why America is so lost when it comes to policy debates. Simply put, many people exist in an intellectually bankrupt world, where their reality checks bounce ... on a regular basis. 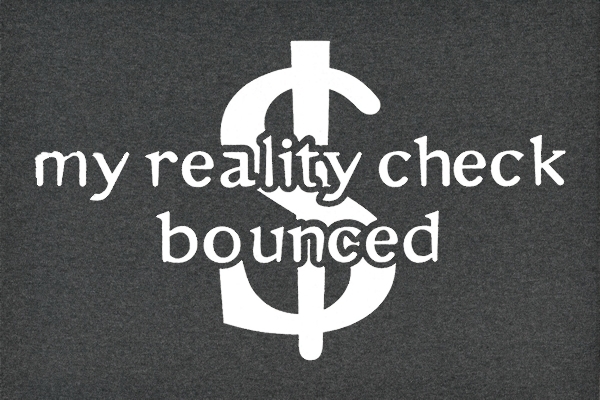 My point was that social security is flush with cash as long as the federal government honors its financial responsibilities and repays the trillions it has borrowed (often listed under "intragovernmental" holdings).

My friends response? It was straight from the republican book of magic numbers. He argued that what the government owes social security isn't real money since, as President Bush once put it, the promise to pay is nothing more than an IOU. So, ta da, there's no money, we're broke ... and it's all President Obama's fault.

I responded by pointing out that if the trillions the feds owe social security are simply IOUs (blue slice on pie chart below) then he just solved our national debt problem. Why? Because the promise to repay those who lend us money to run the government every year are also IOUs (other colors on the chart below). 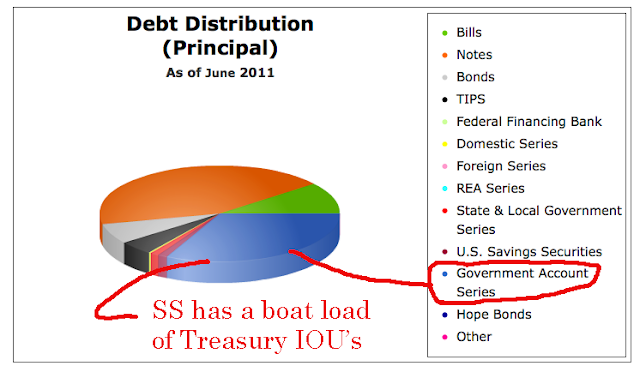 I argued that if we don't have to pay back the nearly $2.7 trillion we "borrowed" from social security (because they're IOUs) then we should not have to pay the IOUs on our national debt either. So, ta da, no budget problem. Pretty simple, right?

After grudgingly acknowledging his failed logic my friend did what most Fox News watchers do. He switched topics.

He began by saying that our real problem is not that social security is broke but that President Obama and the Democrats are to blame for our debt mess because President Obama isn't taking responsibility for the economic condition of our nation.

To make his point (forget that there really wasn't one except to change topics) my friend argued that Senate Democrats are irresponsible for not passing a budget (resolution) in over two years. This, according to his logic, is the height of irresponsibility. He added that at least President Bush's budget deficits can be explained by the fact that he had to deal with two wars, Katrina, and market bubbles.

I thought to myself, Didn't President Obama inherit two wars and have a bubble-induced financial Katrina dumped on his lap? So I sent my friend these comments ...


* ... why does President Bush - who inherited budget surpluses (yes, they were real) and who blew through projected surpluses of $5.6 trillion - get excused for his tax cut driven budget deficits but President Obama - who inherited trillion dollar deficits, two wars, and a collapsed market - have to accept responsibility for what was dumped in his lap? Strange.

* ... If we want to point fingers because there is no budget from Senate Democrats then we need to ask why every major budget proposal now requires a filibuster proof vote (which requires 60 votes to pass) when this has NEVER been a requirement for any president in the past?

* .. Let's get real, Senate Dems can not pass a budget resolution this year for two reasons: First, filibuster, filibuster, filibuster ... Senate Republicans have made it clear that they will filibuster (60 votes) anything they don't like ... Republicans won't cooperate on anything the Senate Dems pass because they want President Obama to look bad. Period. Second, this years budget was effectively completed when the debt limit bill passed last August (keep in mind that Appropriations take up discretionary spending). So, long story short, we do not need a budget resolution this year because Republicans already signed off on debt limit spending.

My friends response? He changed the subject. Again.

There's more, but you get the point. You can't argue with people who are more interested in either creating a strawman argument that only they understand or who want to believe that the world they see is reality.

If I get time I'll be posting about similar conversations I've had in future posts. While they're entertaining, they're also a bit disturbing.