In a sign that President Bush's seven year Debacalypse may be accelerating the decline of the United States at a faster rate than previously imagined, New York stores are now accepting Euros. In fact, one NY store’s sign reads “Euro’s Only.” Bush apologists will no doubt argue accepting Euros is a sign of that “market forces are at work.” This argument works only if your analytical compass accepts continued record deficits as a good thing – or if you’re partial to sticking your head in the sand, and imagining an Orwellian World where living beyond your means is a sign of greatness.

But there’s another way to look at this. And we might as well as be creative while we’re at it. 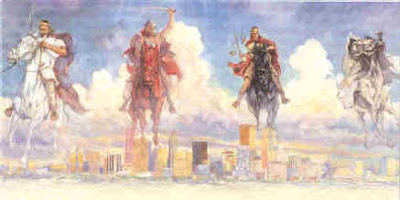 Consider how the collapse of the dollar is part of larger problems that have emerged under George Bush’s watch. For our evangelical friends out there – who look forward to the Apocalypse – we may be witnessing the emergence the last of President Bush’s Four Horseman of Ineptitude. Specifically, we have seen:

All that’s left is for the PALE HORSE OF DEATH to emerge. But wait … If Bush’s empty-headed comments on WWIII are paired with his saber rattling with Iran we won’t have long to wait. Bush’s Debacalypse will come full circle.

Is it November yet?