LET'S FACE IT, TRUMP IS A COMPROMISED MAN. BUT IS HE A BENEDICT ARNOLD? YOU MAKE THE CALL ... 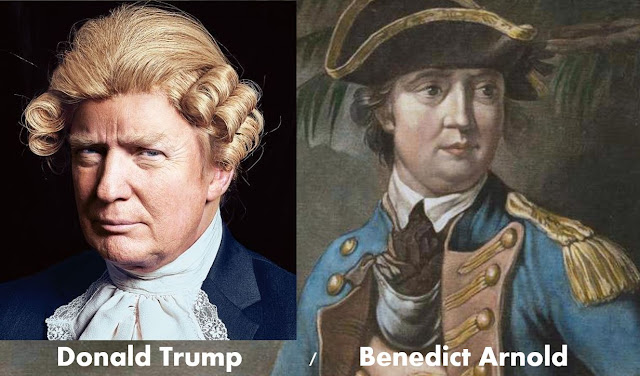 When Benedict Arnold decided against keeping his troops at readiness, he had one goal in mind: surrendering West Point to the the enemy. And why not? While Benedict Arnold was an ambitious man in an emerging nation, he was also seriously compromised. Feeling sorry for himself, Arnold was resentful that he didn't get the recognition he felt he deserved while serving in the colonial army, which fueled his animus towards the colonial militia.

But what really drove Benedict Arnold was the debt loads he had accrued while living a lavish lifestyle in Pennsylvania. This debt would contribute to his decision to betray his friends and the American militia for money, and a new future in England. Later, Arnold would lead British soldiers as a brigadier general in the British Army against the colonial militia. 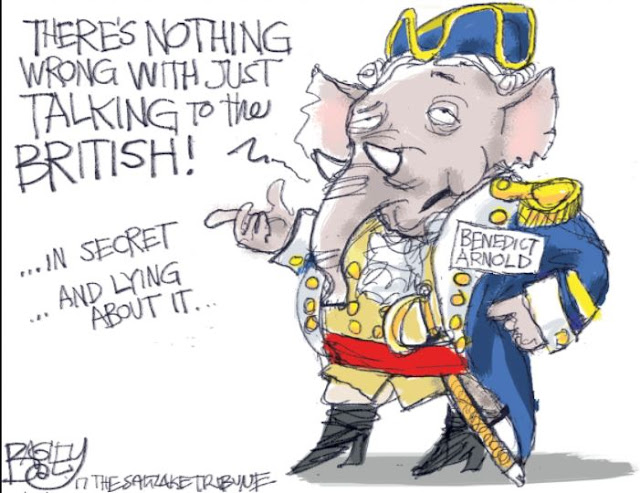 Even if the jury is still out on Donald Trump colluding with the Russians during the 2016 presidential election, a debt and bankruptcy drenched Trump, like Benedict Arnold, has demonstrated that he's OK with surrendering America's democratic fort to those who have already compromised our democracy. The list of transgressions is long.

* RUSSIA OVER OUR NSA: Donald Trump spent the better part of a year making it clear that he believed Vladimir Putin's claim that Russia didn't meddle in our elections over what our national security agencies have said.

* IGNORING ON-GOING THREAT: Acting as if nothing's happened, Donald Trump has left the Russian elections threat unchecked, even though Russia is poised to attack our elections again.

* NO SANCTIONS: Donald Trump failed to impose sanctions on Russia, in the process ignoring sanction authorizing legislation passed by both chambers of the U.S. Congress by a 517-5 margin.

* OBSTRUCTION OF JUSTICE: Donald Trump has fired or dismissed the FBI's James Comey and Andrew McCabe, acting Attorney General Sally Yates, and and U.S. Attorney (NY) Preet Harara, all of whom were just doing their jobs (looking into the Trump-Russia connection).

* ATTACK THE FBI: Rather than going after our known enemy, who meddled in our elections, Donald Trump has chosen to attack the messenger, the FBI.

* NUNES AS TRUMP'S STOOGE: To help defend himself, Donald Trump has turned Rep. Devin Nunes into his political stooge, by getting Nunes to do the "dirty work" for house Republican leaders who are trying to protect him during the Russia investigation.


Like Benedict Arnold 238 years ago, a cash-strapped Donald Trump has effectively decided to "surrender the fort" by ignoring Russia's attack on American democracy, and then undermining and going after the people and institutions in America charged with protecting the nation.

There's more I could discuss about Donald Trump's efforts to "surrender the fort" to Russia, like Trump standing by as the Republican Party launches attack after attack on the FBI and the Department of Justice. Then we have Donald Trump actually thanking Russia for expelling U.S. diplomats from the country, in response to U.S. sanctions (Trump pathetically commented that we needed to cut the State Department's payroll anyways). 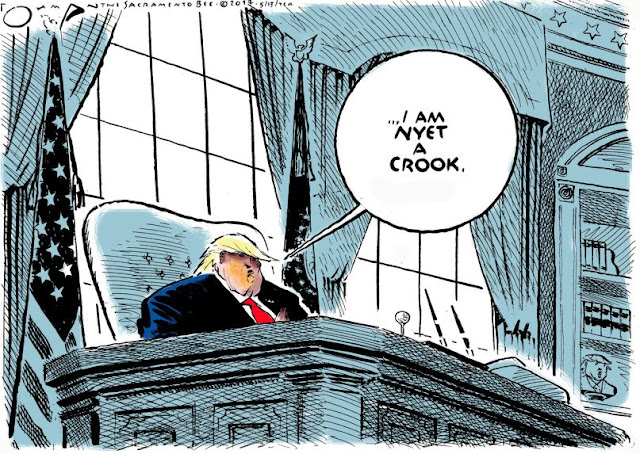 Here's the point: Donald Trump apparently has no problem if America's democracy and its institutions are under attack, or even destroyed, as long as the end result helps protect him.

Below are just a few links, and a meme, that helps explain the damage Donald Trump is doing to our nation and its institutions.

Inside a 3-year Russian campaign to influence voters (NY Times).

Republicans launch attack after attack on the FBI (Washington Post).

The enemy is at our gates. What is the president doing about it (Chicago Sun Times)?

America is under attack and the president doesn't care (The Atlantic).

Thomas L. Friedman: Our democracy is in serious danger with Trump in Charge (Sacramento Bee). 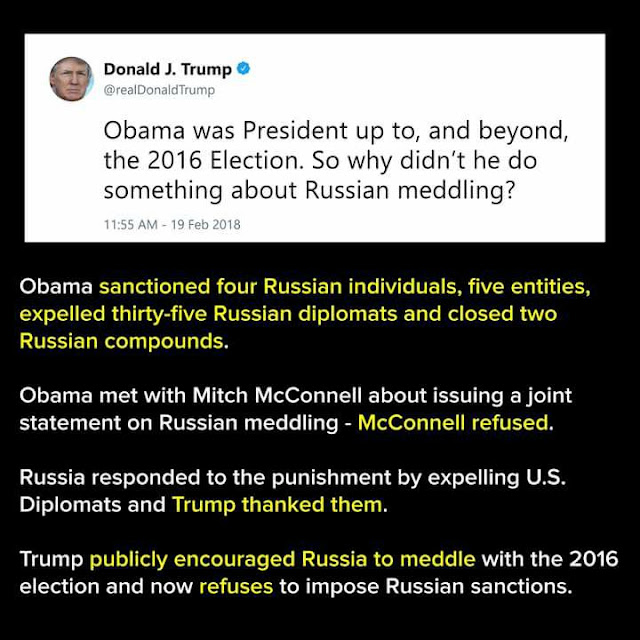