DONALD TRUMP IS THE FACE OF INCOMPETENCE ... CAN'T WAIT FOR SECOND 100 DAYS

President Trump's 100th day as president is fast approaching (April 29). As we contemplate the endless Twitter tantrums and any number of other stupidities he will engage in this week, let's not forget how little he understands about the most basic challenges and dangers that we face as a nation. 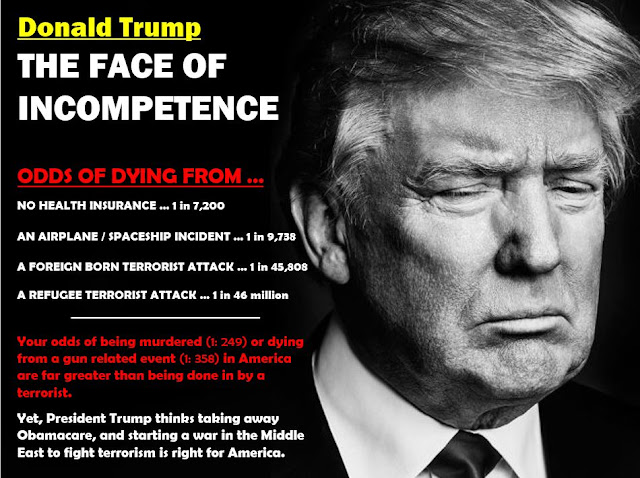 Since President Trump is banging the drums of war in North Korea and the Middle East, let's start with this: terrorists and terrorism pose a very small threat to Americans. Yet, we're constantly told that we need to be afraid - very afraid - of terrorism and foreigners of all stripes. Unfortunately for President Trump the odds of Americans dying at the hands of a foreign born terrorist monster are quite remote. In fact, you will win the lottery before you die at the hands of a terrorist in your lifetime, as this Business Insider piece makes clear. 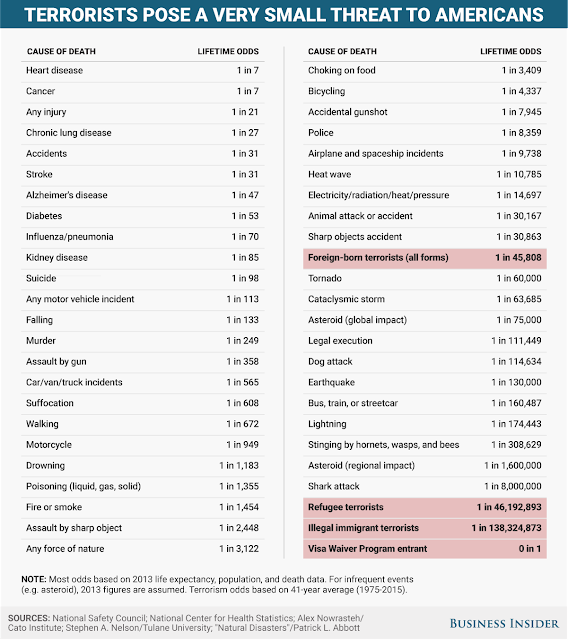 Worse, for Trump's message of fear, according to the very conservative Cato Institute, the chances of you being killed by a foreigner in a terrorist related act is about 1 in 3.6 million per year.

Unfortunately, in our alternative fact-filled universe, where knowledge and informed opinion gets swamped by reckless faith, and wild belief systems rooted in ignorance and fear, facts have little impact on President Trump's supporters. They regularly turn their back on reality. They prefer a world of doubt, shadows, and intrigue. Call it comfort food for the misinformed. It's what allows them to spin conspiracies, and pretend they're the only ones who have figured it out.

All the while, our nation creeps towards crisis in places like North Korea and Syria.

With Donald Trump flip flopping on foreign policy (after getting schooled on NATO and North Korea), backing away from his "China is a currency manipulator" claim (though they still are), deciding to keep NAFTA (after trashing it on the campaign trail), failing miserably on health care ("Nobody knew healthcare could be so complicated"), and generally being a national embarrassment on the global stage during his first 100 days, it's clear that President Trump's only path to greatness (for him) is more fear and the drums of war.

It's all he knows.

Simply put, President Trump understands so little of the world, and even less about how America is actually governed, that he will continue to exhibit the same incompetence that has compelled him to ignore basic facts - like on health care and terrorism - while pushing policies that undermine the long-term security of ordinary Americans.