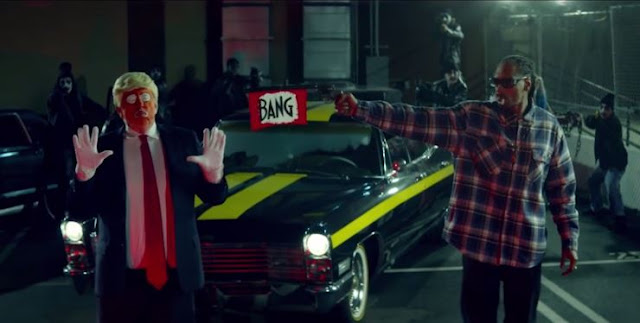 Our so-called president, Donald Trump, thinks Snoop Dogg - "failing career and all" - would have received jail time if he had created the mock presidential assassination video when President Obama was in office.


Here's one of many things wrong with Donald Trump's "jail time!"claim: As the Washington Post points out, "Rap lyrics aren't actual bullets" and "if there's not a true threat, then it's absolutely protected free speech."

In Trump's world, it's OK for him to recklessly claim that President Obama is not a U.S. citizen, then accuse him of wiretapping his phone lines, with absolutely no evidence. But if someone mockingly shoots a bad caricature of him with a toy flag gun, in an act of artistic expression, the topic of "jail time!" has to be broached.

Perhaps the biggest problem I have with our so-called president being such a wilted flower on this is that President Obama - who Trump tried to delegitimize with his birther stupidity - endured far more actual threats and "jokes" that called for his death; and they weren't part of a rap song, or any other artistic interpretation (as you can see here, here, here, and here). People like Ted Nugent were actually calling or praying for President Obama's death, and there was no "jail time!" for him, as Donald Trump is now throwing out there. 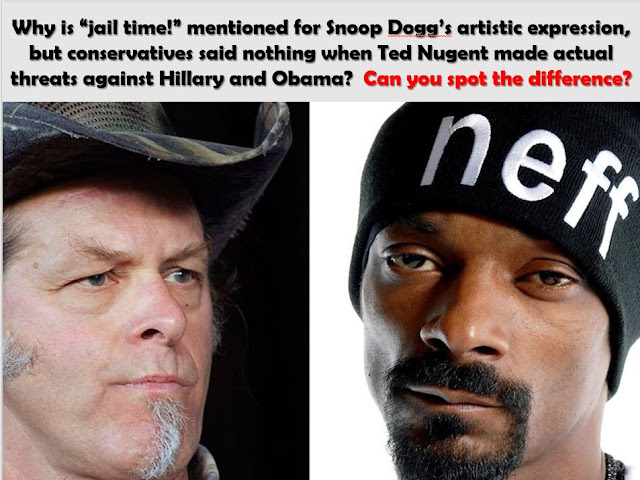 In the United States, the 1st Amendment is pretty sacrosanct. It's one of the reasons garbage like "Infowars" gets to spew the ignorance and stupidity that Trump's supporters thrive on. What this means is that creative art is also protected under the 1st Amendment. So, yeah, if the lunacy that comes out of Infowars gets a pass as free expression, Snoop Dogg's artistic expression does too.

Real Americans understand this. Trump does not.

I'll leave you to fill in the blanks.