THE TRUTH ABOUT OBAMACARE IN KERN COUNTY, CALIFORNIA 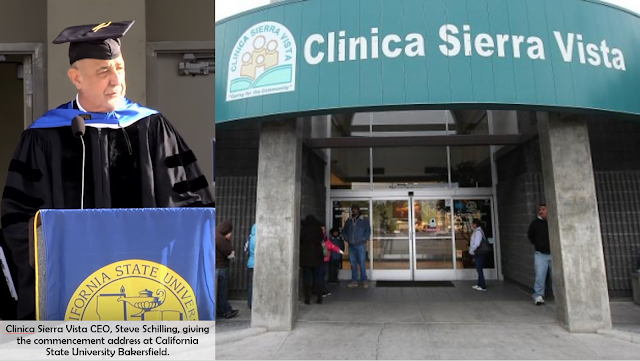 The CEO of Clinica Sierra Vista, Steve Schilling, published an insightful response to a local right wing radio host who wrote a misleading and factually incorrect op-ed about Obamacare in Kern County. Mr. Schilling's response in the Bakersfield Californian is spot on, and based on real time facts in the field of health care. For the record, Mr. Schilling could also have been speaking to Rep. Kevin McCarthy (R-CA), House Majority Leader from Bakersfield, whose position on Obamacare is as misguided and factually incorrect as is our local radio host's.

In response to Inga Barks’ March 2 column, “Reform healthcare, even if government jobs are lost,” the claim that the Affordable Care Act is a job-killer and only created more government-funded jobs is not based in fact or reality.

There is also no evidence that millions of full-time employees became part-time employees or that large numbers of employers kept their workforce to less than 50 employees just to avoid the employer-mandate.

Since the passage of the ACA, popularly known as Obamacare, the U.S. workforce has grown by millions of full-time workers, while fewer people are working unwillingly in part-time jobs. In fact, the U.S. unemployment rate has experienced a steady decline since its implementation, moving from 9.9 percent in March 2010 to 4.7 percent in February 2017. Private sector employment has grown every single month since the ACA passed on March 23, 2010.

Study after study has surfaced over the years, disproving many critics’ claims that the ACA was a job-killer. The reality is, jobs were not lost and the number of part-time workers did not rise. Despite continued assertions by ACA opponents, there is no evidence that supports the notion that the “employer mandate” has led to an increase in part-time employment at the expense of full-time jobs. The ACA was not the “job-killer” many had feared it would be. Quite the opposite is true.

As Obamacare was implemented, private doctors’ offices, clinics and hospitals hired tens of thousands of employees to keep up with the growing demand. If anything, there were not enough health care professionals to meet the demand and that was one of the biggest shortfalls of this historic health care legislation. Additional private sector jobs were created when the demand for goods and services spilled over into other areas of the economy. Health care now represents over 18 percent of the U.S. economy.

The Commonwealth Fund estimates that with the repeal of Obamacare, over 300,000 jobs will be lost in California by 2019. A repeal of the ACA would result in a loss of 2.6 million jobs nationally, with 97.5 percent of the losses occurring in the private sector. Only 2,000 “spillover” federal, state, and local government jobs would be among the job loss casualties.

The real “job-killer” among us is the repeal of the Affordable Care Act. The law that essentially saved and created jobs and covered millions of Americans is now being threatened by unproven claims and a Congress that is making a hasty attempt to make good on an ill-advised campaign promise.

Job loss is not the only consequence of the repeal of Obamacare. Loss of access to health coverage will be the greatest impact. The Congressional Budget Office estimates that a repeal of Obamacare without enacting a viable replacement could leave at least an additional 24 million people without health insurance by 2026.

This would equate to a substantial loss for Kern County. According to the University of California, without the Medi-Cal expansion, Kern is at risk for losing an estimated 4,000 jobs and 95,000 county residents would lose health coverage.

Health care is not a commodity for the wealthy or the privileged. It is our belief that it is a basic human right that should be afforded to everyone based on each individual’s resources and ability to pay. Our community simply cannot afford this economic, and health, setback. These losses would devastate our economy and leave thousands of our family, friends and neighbors without the health coverage that they deserve.

Ms. Barks, it’s irresponsible to be cavalier with other people’s lives. No one is immune to disease, accidents or injuries. For many people, what we are talking about is life or death situations. We see this every day in our community health centers. During these divisive times let’s take politics out of it and let us be the community that embraces compassion and empathy. Let’s model this behavior for future generations.