SILENCE OF THE REPUBLICAN LAMBS

With Bakersfield native and House Majority Whip, Kevin McCarthy, saying he still backs Donald Trump, and GOP leaders Paul Ryan and Mitch McConnell maintaining their support for Trump's presidential candidacy, one thing is clear: the GOP is made up of political sheep who have been beat up and cowed by the the political monster they created, Donald Trump. 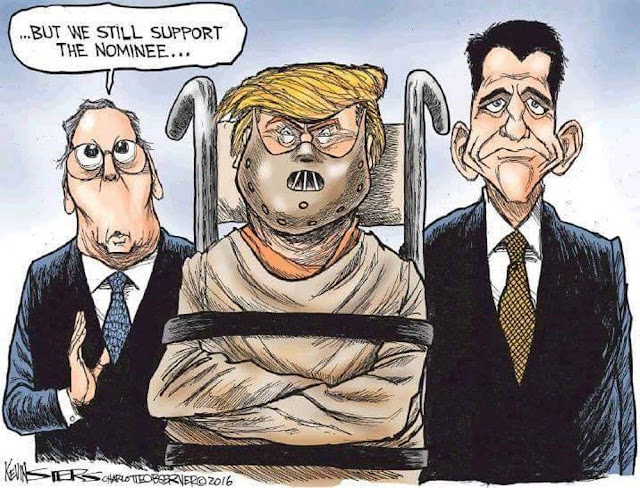 Think about how bad it's gotten for these muted Republicans.

Donald Trump took credit for - and delight in - Kevin McCarthy removing himself from the Speakership sweepstakes (even though his evidence was flimsy). For their part, Mitch McConnell and Paul Ryan have been alternately ignored and condemned by Donald Trump for their waffling commitment to his candidacy.

Yet, today, Trump is still their guy.

And forget the GOP's recent empty finger wagging gestures at Donald Trump for his misogynistic ways. In Trump's world it's all background noise. It doesn't matter. They don't matter.

In Trump's world, Mitch McConnell, Paul Ryan, and Kevin McCarthy are political eunuchs. They have no voice, until Trump tells them they have one.

It's the silence of the Republican lambs, and it's a national embarrassment.