"ALL HE HAD TO DO WAS WALK UPRIGHT, AND NOT DRAG HIS KNUCKLES, AND HE FAILED" ... KGET 17 NEWS PRESIDENTIAL DEBATE ANALYSIS

Republican Cathy Abernathy and I got together for a post-debate analysis on KGET 17 News Sunrise program this morning. Since I got the opening question, I went with the obvious point about Donald Trump: "All he had to do was walk upright, and not drag his knuckles, and he failed" (video clip here). 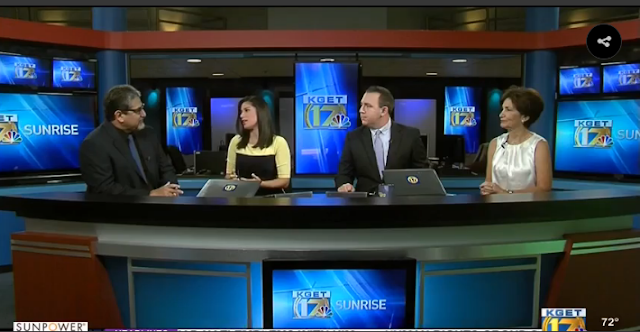 The first question - did Donald Trump stick to the script and look presidential? - was a follow up to my on-air comments from the previous day, where I said that if Donald Trump simply acted civil he would dispel a lot of the concern that he doesn't have the temperament to be president. He simply needed to be calm and act like an adult during last night's debate.

Unfortunately for Trump, while he did well the first 20 minutes, or so - which I acknowledged - he ended up going off the rails, big time.

In fact, by the end of the debate it was obvious that Trump didn't have the "stamina" (as it were) to finish the program. Apart from his very audible snorts and interesting face contortions, he was all over the place when it came to foreign affairs, and seemed completely lost on cyber security (what's up with the 400 lb. hacker?).

For her part, Hillary Clinton looked prepared and, yes, presidential.

To be sure, Hillary seemed a bit frustrated (bemused?) a few times because of Trump's incoherence but it was clear that this wasn't her first rodeo. More importantly, it was obvious that she alone understands the serious of the presidential stage, and the moment.

While Hillary Clinton might get a small bump in the polls from the debate it's also true that Trump's supporters live in another reality, and think he did a great job. This means a presidential race that should be over is a long way from being done.