IDES OF MARCH PRIMARY ANALYSIS ON KGET 17 NEWS ... WHEN PROTOCOL GETS PUSHED ASIDE 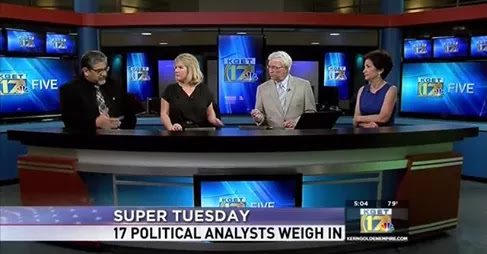 Last night I was one of the political analysts on KGET 17 News with Republican Cathy Abernathy. Things went pretty well. That is until she went off the reservation with three outlandish claims.

Abernathy started by suggesting that George Soros was instigating (paying) supporters of Bernie Sanders to disrupt Donald Trump's rallies. This is simply not true. Go ahead and Google it on Snopes.

The violence that is occurring at Donald Trump's rallies is a product of Trump's "inspirational" message of hate, violence, and scapegoating. Pretty simple. 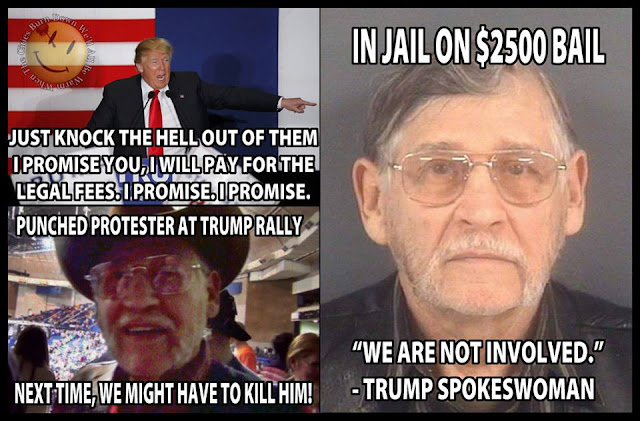 In the name of civility, I let this one go.

Then Cathy Abernathy claimed that Bernie Sanders was a socialist, and began to explain socialism. Too bad for her. Especially since she doesn't understand the concept, or what socialism in America is really about (i.e. corporate socialism and crony capitalism). And Cathy clearly has no idea what Democratic Socialism means (Hint: Think how FDR's New Deal brought the very constitutional promise of "We the people ..." to life). Distinguishing between the two is pretty important - though you couldn't tell by listening to Cathy Abernathy - especially since Bernie Sanders makes it clear that he's a Democratic Socialist.

I got impatient at this point, but bit my tongue (or I at least tried to).

However, when Abernathy suggested universities are bastions of socialist indoctrination I had to breach protocol. We're supposed to be analysts, not propagandists. So I jumped in to try and set the record straight.

As one might expect, news anchor Jim Scott stepped in, since it was Cathy's turn - even if her turn means peddling misinformation.

At the end of the day, it shouldn't be lost on anyone that Abernathy pieced together a string of false claims about the source of Trump's violent rallies (seriously, it's Trump), misrepresented Sanders as a socialist (he's not; Cathy should learn the difference), and made the now robotic conservative claim that universities are socialist indoctrination centers (Cathy is more than welcome to audit a class, or should speak with student interns in her office who have taken my classes).

Ultimately our goal is to provide viewers with good analysis, and the truth. I'll remind everyone about this the next time, even if it means breaking with protocol.

You can watch our Ides of March exchange by clicking here.