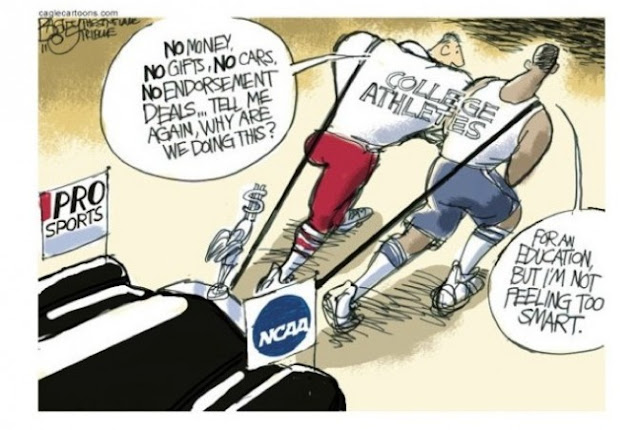 One of my former colleagues, David Berri, is fast becoming one of the most knowledgeable and sought after voices in sports economics. He posted the following on his Facebook page.

This is a great article on college sports, exploitation, and race. These three paragraphs are especially important:

In some cases, officials have made small concessions to avoid bigger ones. When football players at Northwestern tried to unionize in March 2014, alarm bells went off in athletic directors’ offices nationwide. Suddenly, that June, USC committed to giving football players guaranteed four-year scholarships. Before then, scholarships were a year-to-year proposition, renewable at the discretion of the head coach. Some other schools quickly followed suit, lest they be put at a competitive disadvantage.

The NCAA could have made these changes at any time — it didn’t have to wait for players to complain. Only when the free labor threatened to take action did the NCAA respond.

The history of labor relations in sports tells that story over and over again. Ownership does not voluntarily share with workers. Only when workers take action do things change. And you should never, ever believe that owners have the best interest of their workers at heart. Owners are interested in their interests. That is it.
There is a very important lesson here. If you are working for someone else and you are anti-labor, you are against your own interests. You might want to think a bit harder then about your political beliefs.
******************

I encourage you to read the entire article, which you can access here.

FYI Category: As an aside, if you are a sports fan and consider yourself an expert when it comes to evaluating talent or the value of sport athletes - and especially those in the NBA - you really aren't unless you've read David Berri's stuff. You'll understand why once you read what he writes, including his first book, Wages of Wins, which you can access here.
Posted by Mark A. Martinez at 8:15 PM