Rolling Stone magazine posted the "5 Absurd Moments From the Hillary Clinton Benghazi Hearing" earlier today. I'm sure there are more absurdities, but they were putting this together in real time (as it were). 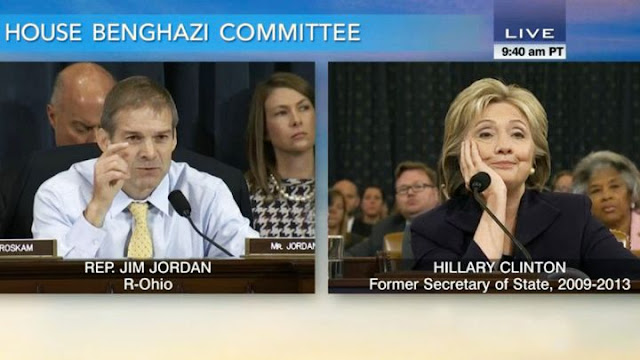 You'll want to read Rolling Stone's observations - especially since they come with video - but know one thing: Rep. Kevin McCarthy (and others) got it right when he made it known that the special Benghazi committee was designed to hurt Hillary Clinton politically. The hearing today was not about bolstering security at our embassies in the future, or knowing what "really" happened.

Here are the Benghazi committee's 5 absurd moments, in brief, as outlined by Rolling Stone.

2. IGNORANCE: Rep. Brooks puts up a map of Libya and admits people (like her) don't really "know much about Libya."

3. JOE McCARTHY'S GHOST: Rep. Mike Pompeo's Joe McCarthy Moment happens when he accuses Hillary's State Department team of meeting with al Qaeda fighters prior to the attack, and then admits he can't produce the information to back up his allegation.

4. DO AS I SAY, NOT AS I DO: Rep. Peter Roskam scolds Hillary Clinton for reading notes while he speaks, which is ironic when you see this ...


5. ROSKAM'S "MEAN GIRLS" MOMENT: Rep. Roskam rudely cuts Hillary Clinton off, while trying to condescend to her for reading her notes, as she's trying to respond to him (after he read his notes while Hillary was responding to him ... huh?).


You can read and watch the moments captured by Rolling Stone here.