WHY THE GOP IS FULL OF ANGRY WHITE (SOUTHERN) MALES ... A SHORT HISTORY

From time to time I have to explain the history of political parties. It's usually because someone has made a broad and misleading statement about Democrats being racists. It goes something like this: Because many southern Democrats were slave holders and bigots during the 19th and the early 20th centuries all Democrats today are political descendants of racist bigots.

For those who make this argument, it doesn't matter that northern Democrats in the 19th century opposed slavery; nor does it matter that Democrats fought desegregation and led the civil rights movement in America during the 20th century. 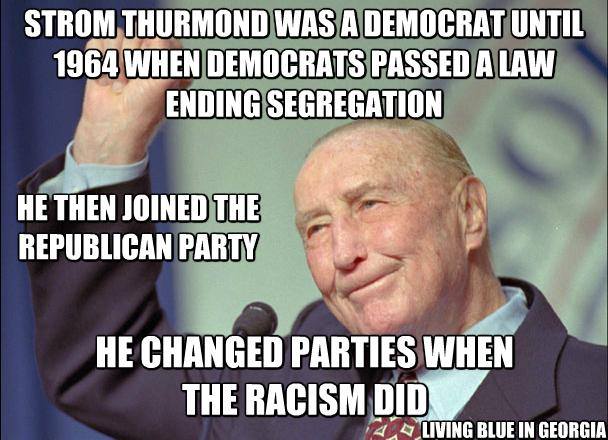 Simply put, when Democrats began to stand up for the rights of women, the poor, and people of color this upset both white males and cultural sensibilities in the south. Many Republicans, contrary to what they claim in public, are still not comfortable about the intrusion of women and people of color into positions of power and authority.

What's ignored by those who want to rewrite history is how southern Democrats began abandoning the Democratic Party once FDR, Truman, JFK, and LBJ began working to end segregation in America.

This political migration picked up steam with Richard Nixon's famous "southern strategy" - which began the culture wars against women and people of color - and went into overdrive when Ronald Reagan courted the last of the "Dixiecrats" in the 1980s.

This explains, in part, why the Republican Party seems like it's made up of angry white southern males to many observers.

In nutshell, the slow march toward ending state sponsored segregation split the Democratic Party, with southern Democrats moving over to the Republican side. This migration helps us understand why the modern Republican party has its political base in the south.

So, yeah, saying "I want my country back" means much more than a desire for a return of conservative policies.

In many ways, what many conservatives really want is to return back to the days when colored folks knew their place and the women made the sandwiches. They've just been too cowardly to say it out loud (which helps explain the fascination with Donald Trump).

If you're interested, you can find a longer history of the evolution of political parties in America by clicking here.