IS HISTORY WHISPERING IN OUR EAR? WHEN IT COMES TO DEBT, GREECE SAYS YES 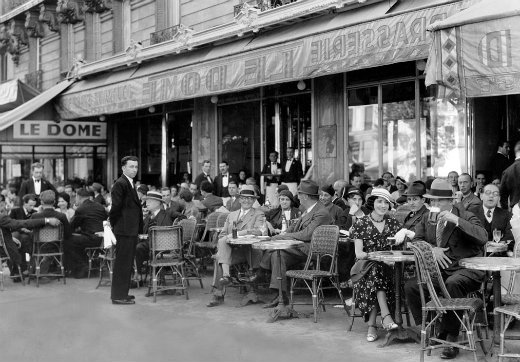 It was 1920. The Europeans were still upset with Germany. In addition to all the blood that was expended on the battlefields of WWI, the major players now found themselves deeply in debt. While the United States found that it owed 33 cents for every dollar in goods it produced, Italy owed 153% of what she could produce in a year. Things were even worse for the United Kingdom (154%) and France (258%).

Germany's debt to GDP ratio - effectively what it owes compared to what it produces in a year - hovered around an astounding 300% (depending on who did the math). 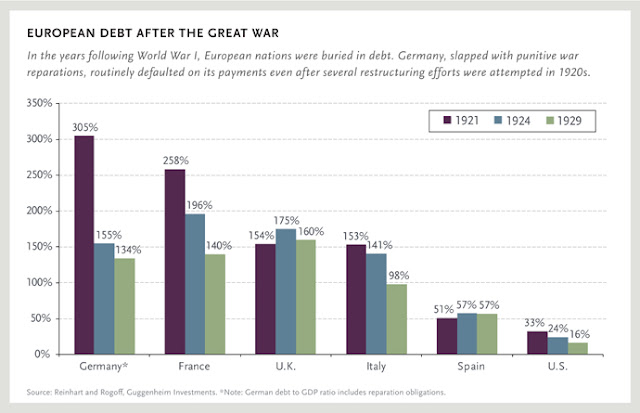 Since U.S. banks demanded that the Europeans repay them in full for the loans they took out during the war years France, Britain, and Italy (among others) were in no mood to cut Germany any slack on their war reparations. Indeed, when European leaders went to President Wilson asking for help to pay back their loans he told them they were on their own (and suggested they see JP Morgan).

Believing that playing hardball would force repayment of all the credits and loans they had provided during WWI, U.S. bankers effectively turned their backs on European states seeking debt relief.

With no relief in sight the Europeans put pressure on Germany who, in turn, began printing money to meet her domestic needs. The world watched in horror as the value of the German mark collapsed. So much money was being printed that newspaper presses were commandeered by the German government. By 1924 it took 4 trillion German marks to purchase one U.S. dollar.

To deal with the unfolding disaster - which British economist John Maynard Keynes famously predicted as he walked out of the Paris Peace Conference in 1919 - the U.S. and the allied powers decided to act. In an attempt to maintain sense of control, the allied powers approved the first restructuring of Germany's debt in 1924, the Dawes Plan.

Named after the principal architect, Charles G. Dawes, the Dawes Plan failed to deal with the dollar amount owed. Instead the Dawes Plan papered over the cracks and focused on currency stabilization, new taxes, and new loans (sound familiar?). Germany was effectively placed in receivership.

Germany's position, however, didn't improve much. How could it? They had neither the means nor the will to pay what the Treaty of Versailles demanded. Even after the Dawes Plan the Germans still owed 123% of what they produced. Germany had effectively become a debtor's colony, which provided the Nazis with a propaganda bonanza.

When the markets crashed in 1929 the Dawes Plan was shown to be what it always was, a political fig leaf forced on the Germans for the sake of international bankers. And this is exactly how the Nazis played it up. 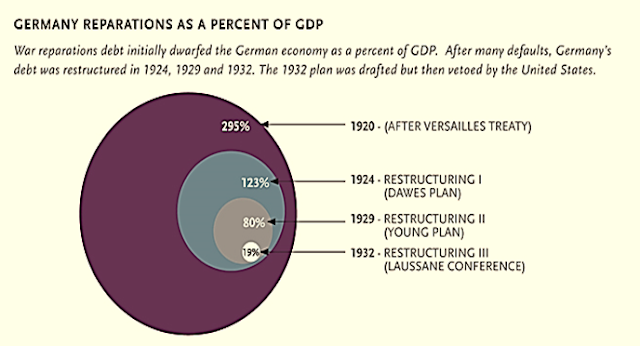 Unfortunately, the "too little, too late" restructuring of Germany's debt could not stop the political serpents that had been unleashed in Germany. The debtor's regime pieced together by the bankers and the allied powers proved to be worse than a fig leaf. It was also a house of cards.

EUROPE'S NEW DEBTOR REGIME ... HISTORY WHISPERING IN OUR EAR?
Understanding the financial situation in Europe after World War I is instructive. It helps us understand the financial similarities between the debtor's regime that was built then, and now.

If we take a look at how debt to GDP ratios around the world have been growing over the past 10 years it becomes clear that there are many similarities with what's happening today and in the 1920s. The obvious difference is that it's the Germans who are acting like the grown ups this time.

Complements of the International Monetary Fund's World Economic Outlook 2015 (p. 182; p.199 on the scroll) we learn that many countries are heading towards the same blind alley of debt that haunted Germany in the 1920s.

What's worse, in spite of what we know about the past, we are prescribing many of the same policies and stipulations that we saw 80 years ago. Think about it.

Global financial elites want everyone to believe that new loans, new taxes, and austerity measures imposed on Greece (with bankers and financiers getting paid off first) will somehow stimulate a debtor state like Greece. The problem here is Greece has had access to loans and austerity measures since it entered the Euro in 2001, but has little more than soaring debt to show for their efforts.

Here's my question: If policies that promoted wealth extraction over wealth creation didn't work in the 1920s, why should we expect them to work now?

* Greece figures derived from Trading Economics.
Posted by Mark A. Martinez at 11:12 PM