THE TRANS-PACIFIC PARTNERSHIP IS NOT ABOUT FREE TRADE, OR EVEN FAIR TRADE 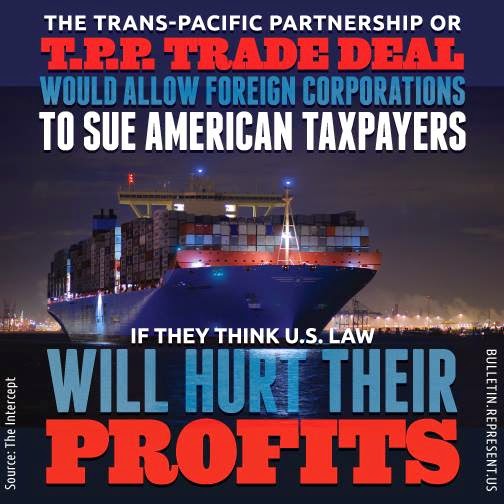 I wrote about the Trans-Pacific Partnership (TPP) over a year ago. Comparing the TPP to the North American Free Trade Agreement (NAFTA) - which I wrote about over 25 years ago (it's in Spanish) - I make it clear that the TPP is not about free trade. How can it be about free trade when one of the primary factors of production, labor, is no where near as mobile or exchange ready as the other two factors, land and capital?

In reality the TPP is all about going after and undermining the rights of labor, while subsidizing and protecting the profits of a global corporate class. The NY Times helps start the discussion on this point ...

An ambitious 12-nation trade accord pushed byPresident Obama would allow foreign corporations to sue the United States government for actions that undermine their investment “expectations” and hurt their business, according to a classified document.


How can the interests of foreign corporations trump U.S. law and state sovereignty, you ask? Very simple. According to Art. VI of the Constitution,


You can read the NY Times piece here. There's a video on the topic here.