ANNOY FOX NEWS FRIENDS WHO ARE OUTRAGED OVER YEMEN ... REMIND THEM HOW REAGAN CUT AND RUN 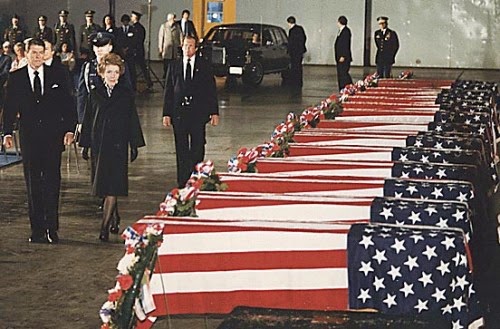 So, this Fox News piece is making the Facebook rounds among conservatives. In a few words, the "breaking news" segment has Megyn Kelly claiming to be astonished and troubled by the growing "outrage" over the United States withdrawal from Yemen this week. Apart from the hyped urgency, in the usual Fox hit piece style of journalism, the segment focuses on how the U.S. has "abandoned another embassy in the Arab world" - yet can't find the time to report on the departure of all other western nations.

The clip also says nothing about how leaving Yemen just might avert another Benghazi mess, a story Fox News hyped and distorted beyond reason.

In all cases, if one of your FB friends sends you the same Yemen focused Fox News hit piece (or anything similar) do what I did. Annoy them with some real simple facts, and a bit of history.

Specifically, you might want to remind everyone that responsible western media outlets are reporting on the departure of the west from Yemen, while discussing domestic challenges in the country. They're also reporting the development as part of a necessary and preemptive response to growing tension and threats of violence.

Then you can remind everyone of the time Ronald Reagan cut and ran from Lebanon in 1983.

Conservatives don't like to be reminded how President Reagan ordered U.S. military personnel out of Lebanon after 241 U.S. soldiers (mostly Marines) lost their lives in Beirut to a suicide bomber. The suicide bomber, who was driving a car laden with explosives, was able to get close to the U.S. occupied barracks because sentries were ordered not to have ammo in their rifles.

Here's what I wrote on the original FB post ...


You guys need to change the channel. Seriously, what's being portrayed on Fox is not reality ... but while we're at it, let's remind ourselves of what happened. You remember, when sentries with no ammo in their rifles had to watch as an explosive laden vehicle blew up a Marine barrack, which was followed by Reagan cutting and running from Lebanon ...

To make my point I posted this article - "When Reagan Cut and Run: The forgotten history of when America boldly abandoned ship in the Middle East" - from Foreign Policy, one of the more respected journals in the foreign policy field. 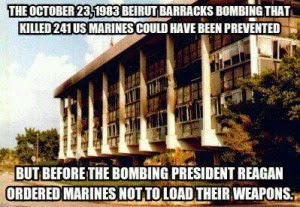 To be sure, there were a series of attacks in Lebanon that led to more than 300 U.S. deaths in 1983. But the barracks attack is the one that stands out.

In the FYI category, after I posted this information the original poster deleted the Fox News piece.