DECLASSIFY ALL OF THE 9/11 COMMISSION REPORT 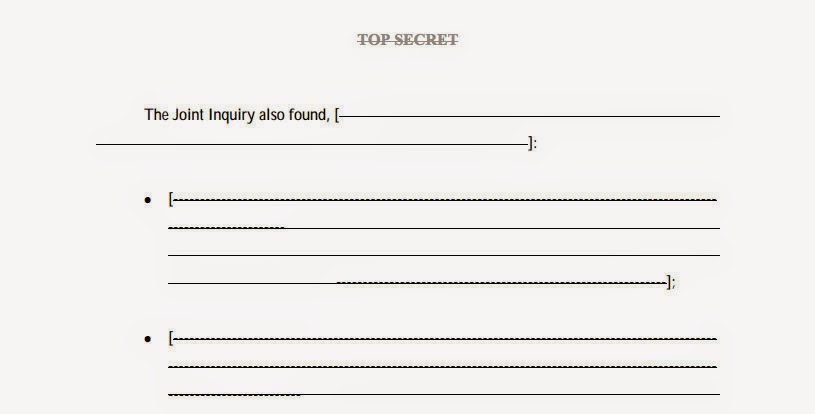 No synopsis. This is worth reading in its entirety.

9/11 Commission Chairs, Congressmen and Intelligence Officers All Call for Declassification


Congressman Thomas Massie read the 28 classified pages of the Joint Intelligence Committee Inquiry into 9/11 (the joint Senate and House investigation into 9/11) and immediately called for them to be released to the public:


A bipartisan bill – introduced by congressmen Walter B. Jones (Republican from North Carolina) and Stephen Lynch (Democrat from Massachusetts) – would declassify the 28 pages of the Joint Inquiry which implicate the Saudi government. Former Congressman Ron Paul is also demanding the 28 pages be declassified:


The Co-Chair of the congressional investigation into 9/11 – Bob Graham - and 9/11 Commissioner and former Senator Bob Kerrey are calling for either a “permanent 9/11 commission” or a new 9/11 investigation to get to the bottom of it.

Senator Graham has lobbied Obama for years to release the 28 pages and to reopen the investigation, but Obama has refused. The former Chair of the Senate Intelligence Committee and 9/11 investigator has even resorted to filing Freedom of Information requests to obtain information, but the Obama administration is still stonewalling:


Graham said that like the 28 pages in the 9/11 inquiry, the Sarasota case is being “covered up” by U.S. intelligence. Graham has been fighting to get the FBI to release the details of this investigation with Freedom of Information Act (FOIA) requests and litigation. But so far the bureau has stalled and stonewalled, he said.

And high-level former NSA official Thomas Drake provided testimony to the 9/11 investigations documenting that the “official story” of 9/11 makes little sense, as the intelligence agencies had all of the information they needed to stop it. Drake’s testimony has – for no real reason – been classified.
Drake is seeking to declassify his testimony to the 9/11 Commission:


I would argue for declassification and release because the 9/11 Commission asked for it in the public interest, my testimony was given to Congress via testimony (oral and written) to investigators as a material witness and whistleblower, because of NSA’s coverup of its accountability for 9/11, and the coverup committed by NSA to obstruct official Congressional investigations, plus declassification is timely in terms of ongoing efforts to reform NSA by Congress and the President.

I do know that my testimony and evidence was fully suppressed and censored as a deep state secret – so secret that it was not included in the classified report of the 9/11 Joint Inquiry.

Indeed, the 9/11 Commission admits that it never got all of the facts … and many officials are eager to spill the beans about what they know.


Although it’s been more than a decade ago when this horrific event occurred, I think [the questions of who supported the attacks] have real consequences to U.S. actions today.


We need to have this information now because it’s relevant to the threat thatthe people of the United States are facing today.

Postscript: People may not remember now, but – at the time – the supposed Iraqi state sponsorship of 9/11 was at least as important a justification for the Iraq war as the alleged weapons of mass destruction. This claim that Iraq is linked to 9/11 has since been debunked by the 9/11 Commission, top government officials, and even – long after they alleged such a link – Bush and Cheney themselves.
But 70% of the American public believed it at the time, and 85% of U.S. troops believed the U.S. mission in Iraq was “to retaliate for Saddam’s role in the 9-11 attacks.”


Significant portions of Americans still believe that Saddam and al-Qaeda were in cahoots and cooperated in the 9/11 attacks. The reason is simple: the administration told them this lie.

An investigation by a committee in the House of Representatives in 2004 identified “237 misleading statements about the threat posed by Iraq that were made by President Bush, Vice President Cheney, Secretary Rumsfeld, Secretary Powell, and National Security Advisor Rice. These statements were made in 125 separate appearances, consisting of 40 speeches, 26 press conferences and briefings, 53 interviews, 4 written statements, and 2 congressional testimonies.” According to the committee, at least 61 separate statements “misrepresented Iraq’s ties to al-Qaeda.” A Senate investigation in 2006 also covered these lies.

Keeping this lie afloat took some work. The Bush administration, primarily Dick Cheney and Don Rumsfeld, “applied relentless pressure on interrogators to use harsh methods on detainees in part to find evidence of cooperation between al Qaida and the late Iraqi dictator Saddam Hussein’s regime,” McClatchy reported in 2009.

According to Lawrence Wilkerson, chief of staff to Bush’s Secretary of State Powell, “the administration authorized harsh interrogation” in 2002, and “its principal priority for intelligence was not aimed at pre-empting another terrorist attack on the U.S. but discovering a smoking gun linking Iraq and al-Qa’ida.”

In other words, the failure to conduct a real 9/11 investigation contributed to the Iraq war, torture, and the failure to fix fundamental weaknesses in – and threats to – America’s national security.