GUEST POST: "AMBASSADOR STEVENS' ACTIONS IN BENGHAZI, NOT ONLY CARELESS BUT RECKLESS"

Stevens’ death has caused continuing criticism of American diplomatic security abroad with one of the latest manifestation of partisan rancor taking place Jan. 23, during Secretary of State Hilary Clinton’s six hours of testimony before House and Senate Foreign Affairs Committees.  Republican Senators and House Members of these respective committees continue to accuse the State Department, and Secretary Clinton in particular, of malfeasance, and in the words of Senator John McCain, “It was either willful ignorance or abysmal intelligence….” Republican critics of the events surrounding the Benghazi Consulate attack also accuse the Obama administration of an extensive cover-up of the entire affair.

The truth is, that while the killing of Ambassador Stevens and three other U.S. employees was tragic and lamentable, Ambassador Stevens, himself, was, in many ways, responsible for his own tragic death.  His actions were not only dangerously risky but one might say, even reckless.  While obviously he can be considered a true American hero for giving his life for his country, and one does not want to impugn his character, we must, nevertheless, look at his behavior leading up to the tragic event.

As noted above, John Gordan Mein’s assassination in Guatemala in 1968 was the first killing of a U.S. ambassador.  As a result of this assassination, the U.S. Embassy in Guatemala has continuously had a very high level of security surrounding the ambassador and other embassy personnel.

I served as a political officer at the Guatemalan Embassy from 1980 to 1982 during the years of rebellious turmoil in that country and all of Central America.  Our ambassador at the time, Fred Chapin, always traveled with three American agents in an armored limo with two additional chase cars, and a total of 14 security guards whenever he traveled outside of the embassy.  One of the security agents in the limo was always a paramedic and the trunk of the limo contained, not only additional weaponry, but also had extensive medical supplies, including plasma and oxygen.

It should be noted that Marine security guards are assigned only to U.S. embassies abroad, and generally not to consulates.  In most instances, this is only a detachment of two squads, 24 Marines, and in bigger embassies, perhaps a platoon of 36 Marines.  In the case of Libya, there were Marines assigned to the Embassy in Tripoli, but not to the consulate in Benghazi.  The consulate was protected by a handful of Libyan security personnel.  Ambassador Stevens arrived at the consulate with only two American security agents, Glen Doherty and Tyrone Woods, who were also killed in the attack on September 11.  The third U.S. Foreign Service officer killed along with the Ambassador was Sean Smith, a consulate information officer, not a security agent.

Ambassador Stevens’ visit to the consulate in Benghazi at this particular time raises many questions as to the “dangerously risky” behavior on his part.

There were only seven Americans in the compound at the time, including Ambassador Stevens, who was visiting Benghazi “to review plans to establish a new cultural center and modernize a hospital.”  There were no Marines protecting the consulate and the Ambassador had only his two American security agents with him. 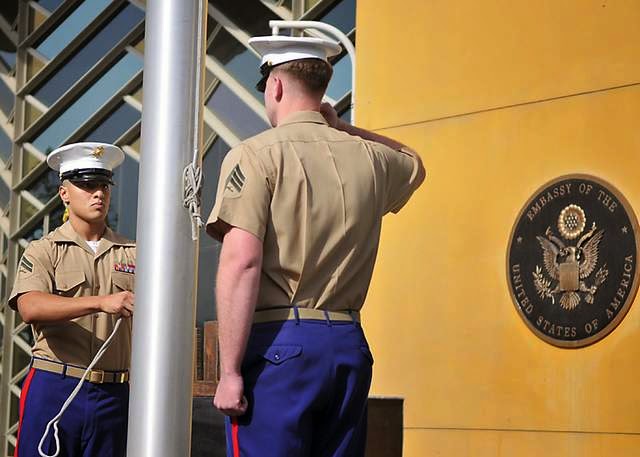 A Congressional Committee, after the attack, released findings that concluded that there had been: “more than a dozen attacks and events in the 6 months prior to the September 11 attack—including car jackings, kidnappings, assassination attempts, and gun battles—all of which indicated a clear pattern of security threats that could only be reasonably interpreted to justify increased security for U.S. personnel and facilities in Benghazi.”

Given the continuing turmoil in Libya after the fall of Moammar Gadhafi, it is difficult to understand why Ambassador Stevens would venture out of the Embassy in Tripoli with such little protection and visit the minimally guarded consulate in Benghazi.  The idea of visiting the city for the purposes of “establishing a new cultural center” at a time of such turmoil in the country seems unreasonable.  But this was not out of character for the Ambassador.  Stevens was fluent in Arabic and considered himself and expert on the Islamic culture.  He had made numerous efforts to go out among the inhabitants of the country in an attempt to demonstrate how sensitive U.S. diplomats were to the struggles of the people in the midst of the civil turmoil.

Several months before Ambassador Stevens was killed in Benghazi, Minnesota Supreme Court Justice Paul Anderson paid a courtesy call to the U.S. embassy in Tripoli.  In a comment to McClatchy News, Anderson noted: “Stevens was well aware of the perils that surrounded him, but he was adamant that good diplomacy meant getting out of the fortress-like U.S. compounds that dot the Middle East.”
Stevens’ visit to Benghazi was not ordered by the State Department nor was it of any strategic diplomatic necessity.  It was, one can assume, another effort by the sensitive Stevens to put his best diplomatic foot forward in a show of genuine empathy for the Libyan people. Anderson also noted that: “He (Stevens) was not careless. He was not cavalier. He was realistic, but he made some very pragmatic decisions.  We will always have people who take risks on behalf of our country because they think it’s worth it.”
Certainly, Ambassador Stevens knew there were risks. Three days after the attack on the consulate, Arwa Damon, a CNN correspondent, found Ambassador Stevens' diary at the site of the attack. In the diary, Stevens had “expressed his concern about the growing al-Qaeda presence in the area and his worry about being on an al-Qaeda hit list.”  This alone should have been reason enough for Ambassador Stevens to exercise more caution for his own safety and that of his security detail.  For him to have left Tripoli for the consulate in Benghazi with only two security guards as protection was more than careless.  His behavior was more reflective of a “cultural attaché” than that of an ambassador of a Middle East country in the throes of revolution.
While Justice Anderson further noted in his McClatchy comments, Stevens’ “optimism was almost tangible, but I don’t think it was Pollyanna or rose-tinted. He knew the risks.”  Yes, he knew the risks but seems to have totally disregarded them.
As previously noted I served in Central America during the turbulent 1980s.  From 1980 to 1984, I was a frequent visitor to El Salvador, Nicaragua and Honduras, along with the two years I was permanently stationed in Guatemala.  No ambassador in any of those countries would ever have considered traveling outside of the embassy with less than a dozen security personnel in fully armored vehicles. 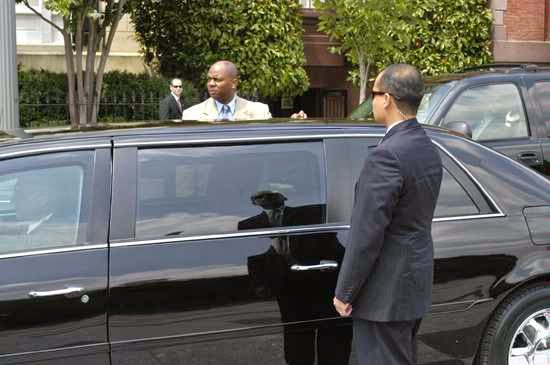 We are told there was a CIA security detachment not far from the consulate in Benghazi, but it was not on the scene protecting the consulate or the ambassador.  Stevens’ actions were not in keeping with necessary security procedures required in the region.  With Libya, Syria, Egypt and other countries of the Middle East experiencing continuous rebellion and death, one would assume that our diplomats would exercise better judgment.
No one, not Secretary Clinton nor anyone else in the Administration, would ever want to blame Ambassador Stevens for his own death.  Certainly murdering terrorists were responsible.  He is, indeed a martyr in the history of American diplomacy.  His genuine goodness, brave behavior, and concern for the Libyan people are without question.  But the Department of State in its efforts to improve security for its diplomatic missions abroad, should also insist that its diplomats act intelligently and with the utmost caution.  Ambassador Stevens’ actions, while noble, were not only careless, but naively reckless. 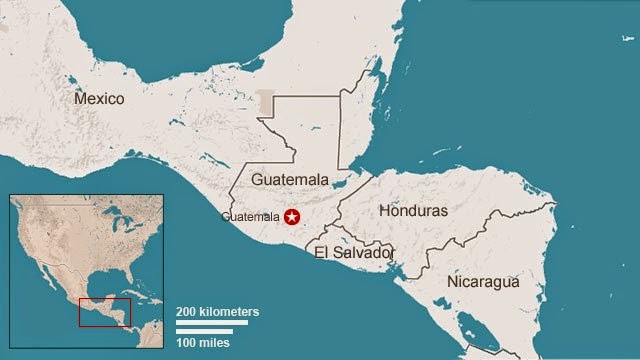 Ambassador John Gordan Mein's assassination - like Ambassador Stevens' - did not occur in a vacuum. When Ambassador Gordan Mein was killed in 1968 Guatemala was in the midst of a vicious civil war that started with the political instability created by - to put it bluntly - the United States after it overthrew the democratically elected government of Jacabo Arbenz in 1954. After installing and backing a succession presidential-miliatry puppets to govern Guatemala the United States did little as one military dictator after another ignored and then terrorized Guatemala's rural poor.

The U.S. turned a blind eye to the state sponsored violence because successive Guatemalan governments put a priority on maintaining a strong anti-communist stance (to curry U.S. favor) and protecting U.S. commercial interests. Responding to the brutality and inequality, nationalist rebel groups began to spring up throughout Guatemala to oppose the poverty, inequality, and military dictatorships. The guerilla group - FAR, or Fuerzas Armadas Rebeldes - that killed Ambassador Gordan Meins was one of many groups that rose up to protest Guatemala's U.S.-backed military dictatorship. Violence was so entrenched in Guatemala that when the Archbishop was kidnapped in 1968 no one seemed to care because "it was like athlete's foot in a leper colony," according to one observer.

Put another way, Ambassador Gordan Mein's assassination was a product of a violent atmosphere that he may have known about but did not adequately prepare for ... in spite of his understanding of the region.

I'll let you draw your own parallels, and conclusions with the Stevens case.